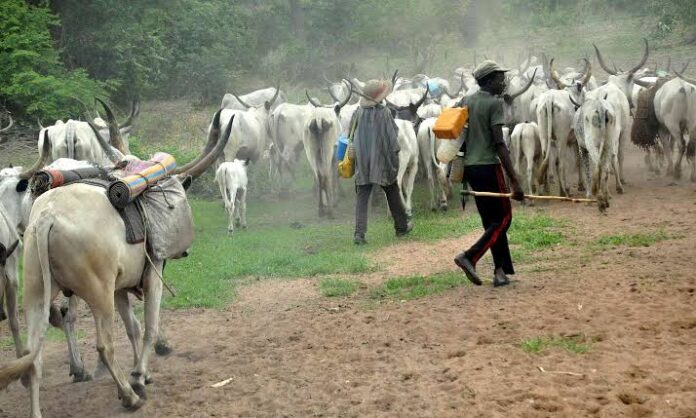 About 1500 cows were killed in an air strike at Fulani herdsmen settlement locations in Takum Local Government Area of Taraba State.

News Desk Paper gathered that a fighter jet launched an air strike at a Fulani herdsmen settlement around Kashinbila and Tor Donga areas on Wednesday and Thursday in which about 1500 cattle were killed.

The air strike, it was learnt, occurred at about 11am and 4pm on Wednesday and Thursday.

A victim, Sadu Saidu, told Daily Trust that he lost about 120 cows while his brother Sale lost 105 to the air strike.

“We are about to lead our herds to grazing area when we heard the sound of an approaching aircraft and it came with fire.

“We all ran for our lives and took cover under big trees and within minutes we countered about 700 cows dead and that was the first strike,” Sadu said.

He said the same aircraft came the following day for another air raid of the two settlements killing 750 cattle.

Another victim, who identified himself as Musa, said apart from the cows killed, several others (cows) were wounded and they had disposed them in Takum town.

He said the incident had forced hundreds of Fulani herders to move towards Cameroon with their herds.

A resident of Takum, Yakubu Rabiu, said cow meat is now everywhere in Takum and being sold at cheap rate.

The chairman of Miyyatti Allah, Takum Local Government, Alhaji Bello, could not be reached as he did not answer several calls from our reporter.

The Spokesperson of Taraba police command, DSP Usman Abdullahi, confirmed the incident, but said “where the incident happened is in Benue state and not in Taraba.”

“The matter under inquest is in Benue state not Takum as confirmed to me by the DCO Takum Division please,” the PPRO said.

The Establishment Of 3 State University: The Take Of Ndokwa People...