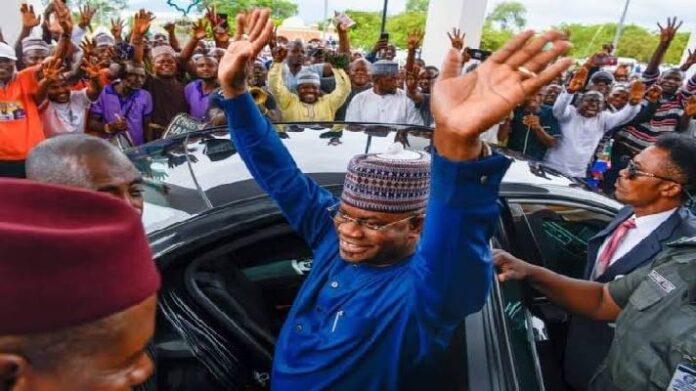 Too many things had happened over the weekend that I don’t have time to respond to so many things I saw popped up on social media.

As an inspired writer, everything I see always caught my attention and make me ponder. Some times, I will just have to let go of some of them and allow them be.

But this very one I saw first, on social media was too shocking for me to let slip by without allowing his Excellency, Governor Yahaya Bello of Kogi state to know that he is living in fool’s paradise if what I saw on social media posted by kogi state Commissioner of information Mr, Kingsley Fanwo was truly posted by him.

It looks to me like after these vampires have sucked the blood of Kogi state dried, they got high up with the alcoholic content and resorted to play with the collective intelligence of the people of all Kogites Nigerians in general who are waiting in the ring to ambush and challenge their political ambition come 2023.

It is like the money they have stolen from our treasury with impunity and our helplessness to fight and recover the money has made them to believe that we are senseless and as such do not know what we are doing.

One of such persons is, Governor Yahaya Bello. It was quite a rude shock when I saw a cropped photograph of the Governor and his commissioner of information Mr, Kingsley Fanwo, the senior comrade of all the eyes service men (sychophants) in Africa and beyond dropped a statement that Nigerians home and beyond are mounting pressure on his principal to come out in the race for presidency come 2023.

I couldn’t believe it at first. I had to rush to the table to wear my glasses to see if my eyes were not playing tricks on me. I quickly scrolled down the comment section to see the reactions of those Nigerians who were mounting pressure on Governor Yahaya Bello to throw his hat into the ring for presidency come 2023.

Guess what! Mr, Fanwo did say it and I thought in my mind almost immediately that there should be an award package for failure in government places just like there is an awards for those who perform excellently well in government places so that anyone so that any public who doesn’t perform well would know the fate that await them after expiration of their tenure.

The award should come with the packages such as a ban on such people from vying for any political post in Nigeria and also a visa ban on them too.

It is so painful and unfortunately, we don’t have such and what we have is rewarding poor performance by singing and praising them for a little morsel of meat. Such praises makes them to think that they have done well.

Mr, Fanwo is a dishonest man who always looks for something to put on media table for a praise and eulogy from his master.

I said this because I know that he Mr, Fanwo should have known better than anyone else that Kogi state under his principal’s watch is not any better.

Why touting him for a higher ground and a higher mandate or is Mr, Fanwo setting him up to lavish the money he stole?

Therefore, I call on Mr, Fanwo who is becoming another Lie Mohammed in kogi state to as soon as possible delete or withdraw that statement from social media because the backlash it generated for all kogites is much of an insults than attraction.

Imagine someone saying “Nigeria is not like your mumu Kogi state that you think you governed?

Anyway Mr, Fanwo has done his job in the eyes of his master and I believe that there is a higher pay for a job well done since he knew that if he advised otherwise, he might not get his stipend or even cost him his job.

NUTRITION The Only Way To Good Health By Ebi Pere

IPOB Sit-At-Home: No Disruption Of NECO Examinations In South-East – NECO

Certificate Delay at CAC Asaba Office A Nightmare To Be Looked...