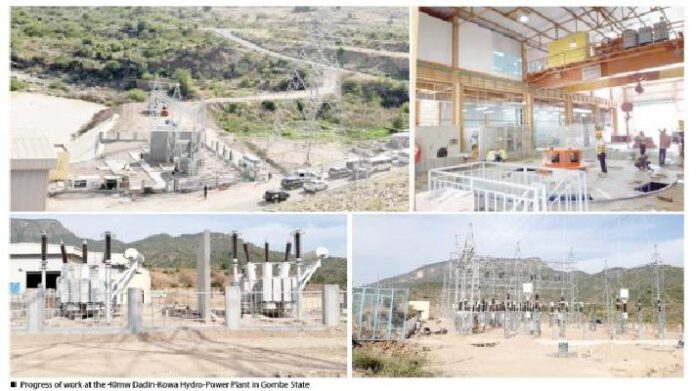 The Dadin-Kowa Hydro-Power Plant in Gombe State, initiated in 1959 to generate 40 megawatts of electricity is now ready for inauguration after 60 years of execution setbacks.

Those familiar with the project described it as “a success story” despite the long delay it suffered. People of Dadin-Kowa and adjoining communities said the power project will add impetus to the socio-economic development of the northern region and the country at large.

Though the project was initiated a year before Nigeria’s independence, the contract for the dam project was not awarded until 1980, and the inauguration eight years later, in 1988, by then military president, General Ibrahim Badamasi Babangida.

The reservoir has a capacity of 800 million cubic meters of water and a surface area of 300 square km. The dam has potential as a source of fish, but nothing serious was done on the electricity potential until recently. Governor Muhammadu Inuwa Yahaya of Gombe State with other officials of the plant at the control section of Dadin-Kowa Hydro- Power Plant

While the dam was inaugurated nearly 40 years ago in 1988, work on the electricity component, designed to be producing 40 megawatts of electricity, has been going back and forth for 31 years after the dam components had been completed. The Dadin-Kowa Dam is located 5km north of Dadin- Kowa village and 37km from Gombe town, along Biu road.