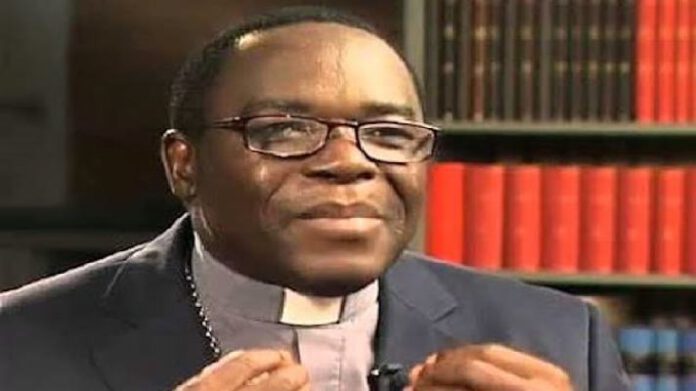 The Federal Government on Friday warned the Catholic Archbishop of Sokoto Diocese , Rev Fr Matthew Kukah, against indulging in “ actions that are capable of dividing the country along religious lines ” .

The regime , however , advised him to use his “ high ecclesiastical office to work for religious harmony in Nigeria” .

The Minister of Information and Culture, Alhaji Lai Mohammed, gave the warning in a statement by his Special Assistant , Segun Adeyemi .

He was reacting to a statement credited to Kukah , in which he compared the Federal Government with Boko Haram .

The government said it was “ not only disingenuous , but also a great disservice to the men and women in uniform who are daily battling the Boko Haram and ISWAP terrorists to keep all Nigerians safe ” .

According to Mohammed , the position of the retired Major General Muhammadu Buhari regime is that the terrorists do not subscribe to any religion , irrespective of their pretence.

He said they were being driven by “ their primitive propensity to kill mindlessly and destroy without restrain , irrespective of their victims’ creed, gender or tribe” .
He added, ‘’To now attribute the actions of these mad bunch to an orchestrated and systematic plan to elevate one religion over the other or decimate adherents of a particular religion is not only unfortunate but divisive , incendiary and insensitive. ”
The minister appealed to religious leaders to be “ more circumspect in their comments, especially on religious issues , because of the deeply emotive nature of religion and the tendency for it to be exploited for political gains by naysayers ” .

2023: Nigeria’s Next President Must Pay Attention To Restructuring – Tambuwal

MultiChoice Nigeria Slashes Price To 44% For Dstv and 75% For...