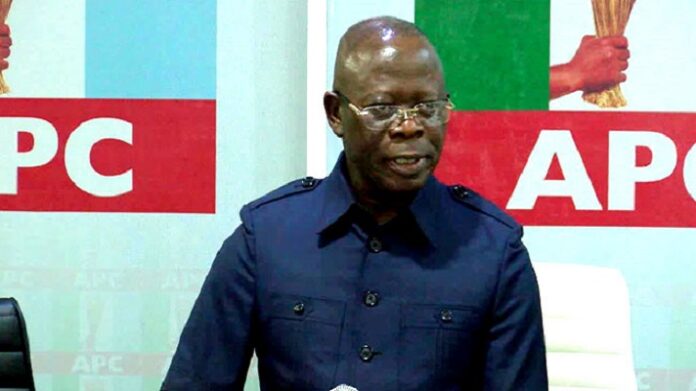 Less than two weeks after declaring to contest the All Progressives Congress’ presidential primary election, it has been confirmed that former Governor Adams Oshiomhole is no longer in the race to become the next president of Nigeria, News Desk Paper report.

A credible source close to the former APC national chairman said that Oshiomhole was no longer in the race due to what he described as “political and strategic reasons.”

The source further confirmed that Oshiomhole did not purchase the APC presidential nomination form because he was prevailed upon by APC stakeholders to concentrate on his senatorial ambition and align with APC national leader Bola Tinubu, a frontline presidential hopeful of the APC.

“People assumed that he (Oshiomhole) has paid for the form. He wanted to buy, but he now said okay, what is the purpose since we are on the same page with Asiwaju. So what is the purpose of buying the form? However, we had already made a point,” the source, an APC chieftain, said.

Oshiomhole had, on April 4 in Abuja, declared to contest to clinch the APC presidential ticket. He had vowed to run an economy that would ensure even distribution of wealth to Nigerians.

His objectives were to reform the banking sector and other ailing sectors, including education in Nigeria, particularly the perennial ASUU-federal government crisis, if elected president.

El-Rufai Insists It’s Time To Restructure Nigeria, Says We Have No...