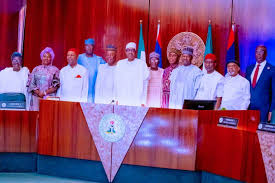 Intense lobbying has commenced in states and Abuja as top shots of the All Progressives Congress (APC) jostle to replace eight ministers who left the federal cabinet last week to pursue their 2023 ambitions, News Desk Paper report.

President Muhammadu Buhari had on Wednesday during the Federal Executive Council (FEC) meeting, asked members of his cabinet who have picked forms of the party for various elective positions to resign.

It was gathered that many chieftains of the ruling party in the affected states have been waiting for the exit of the ministers since the introduction of section 84(12) in the Electoral Act, which barred ministers from participating in the party’s convention, congress, and primaries while still serving in office.

News Desk Paper reports that in some states, the development rekindled the hopes of aggrieved members of the party to benefit from the government. The president had only sacked two ministers Sabo Nanono (Agriculture) and Saleh Mamman (Power).

The swift moves by the chieftains were a result of the pledge of the president that he will not waste time in replacing the former cabinet members.

In Imo State, the resignation of Minister of State, Education, Emeka Nwajiuba, has ignited the old rivalry between the two powerful factions of the party in the state. Nwajiuba was the first presidential aspirant to purchase the party’s nomination and expression of forms.

The fight for Nwajiuba’s successor is being fought from three angles. The camp of the state Governor, Hope Uzodinma, that of Senator Rochas Okorocha and the minister’s camp. The feud between Okorocha and Uzodinma had polarised the party in the state.

Okorocha is said to be using his new rapprochement with the president to recommend one of his aides to replace Nwajiuba.

Our correspondent also gathered that Nwajiuba is leaving no stone unturned to ensure that he produces his successor.

The former minister is said to be extending his lenses to Senator Frank Ibezim, who was his assistant before he won the rerun for the Imo North senatorial zone in 2021.

President Buhari had singled-handedly chosen Nwajiuba as a minister because of his long-standing relationship with him.

Some top politicians of APC extraction in the state loyal to Uzodinma have begun eyeing the post, expecting to get the governor’s endorsement.

It’s hoped that Uzodinma, as leader of the party in the state, may recommend a replacement to President Buhari, to make up for his sidelining during Nwajiuba’s appointment.

However, Special Assistant to Uzodinma on Local Media, Modestus Nwamkpa, said that it’s entirely the president’s prerogative to fill the vacant position.

He said, “Though Governor Uzodinma may have input, just like other interested parties, the bulk stops ultimately on the table of the president.

“Don’t forget the president appointed Nwajiuba in the first place and so he also has the prerogative, maybe in consultation with the party hierarchy, to fill the vacant position.”

He said that the party has absolute confidence in the president to make the right choice.

Following the resignation of Pauline Tallen, who hails from Plateau State, as Minister of Women Affairs, the names of three persons have been mentioned as a possible replacement.

They are; Architect Pam Dung, a former Coordinating Chairman of the National Prototype Housing Scheme at the Federal Ministry of Works and Housing, former state Minister of Information and Communication, Alhaji Ibrahim Dasuki Nakande and Bashir Musan Sati, the former state Secretary of the APC.

However, political observers say the possibility of any of the said politicians being appointed as the minister is dependent on the approval of Governor Simon Lalong, who may possibly get the nod of the president.

Sources within APC in Ondo State also said that Mr Olusola Iji may be considered as a replacement for the ministerial seat. Iji was said to be one of those penciled down at the time Alasoadura was picked for the position.

Iji is currently heading the campaign for Governor Akeredolu’s wife, Betty who is going for Senate in her Imo State.

Others who may also be considered include Bunmi Ademosu, Ademola Adegoroye and Boye Oyewumi.

Bunmi Ademosu and Ademola Adegoroye are from Ondo Central where Alasoadura hails from.

No clear position on who replaces Amaechi

There is no clear position on who will replace the Minister of Transportation, Rotimi Amaechi, our reporter learned from Port Harcourt.

Some of the chieftains of APC in Rivers State who spoke with our reporter under the condition of anonymity said that the picture is not very clear over who will replace him.

A chieftain of APC in the state said that everything about the resignation of the minister remains very ambiguous to them.

Addressing Kaduna State APC delegates on Sunday, Amaechi said he was yet to resign saying however that he would resign on Monday (today).

The state Publicity Secretary of APC, Senibo Chris Finebone said that he is not aware if people are lobbying for Amaechi’s replacement.

Sylva yet to resign as petroleum minister – Aide

However, the Minister of State for Petroleum, Chief Timipre Sylva is yet to resign his position.

His Media Assistant, Julius Bokoru, said  that his boss has not resigned from his position.

Sylva was among the serving ministers that purchased N100 million APC presidential form to succeed President Buhari during the 2023 election.

Though it was not clear if the Sylva, a former Governor of Bayelsa State has withdrawn from the presidential race just like the Minister of Labour and Employment, Dr Chris Ngige did.

When probed further about Sylva’s presidential ambition, Bokoru simply said ‘Well, I cannot speak further on that for now.’

Also, the Bayelsa State Chairman of APC, Barr Dennis Otiotio, said that he was not aware if Sylva has resigned from his position.

Already, some party chieftains loyal to the former Minister of State for Agriculture and Rural Development, Senator Heineken Lokpobiri, are plotting for his return to Federal Executive Council (FEC) if Sylva resigned.

Lokpobiri, who is the leader of one of the APC factions in Bayelsa State operating from a different office in Yenagoa, with its leadership different from the one loyal to Sylva, is said to have been projected to take the slot of Bayelsa State if Sylva resigns because of his ability to use the position to empower the party faithful in the state and unite the party ahead of the general election.

A chieftain of the party who spoke on condition of anonymity said with Lokpobiri at the Federal Executive Council, Bayelsa APC will be more united compared to what is going on at the moment where factions have threatened the popularity of the party in the state.

Buhari will decide on ministers who made u-turn – Shehu

The Senior Special Assistant to the President on Media and Publicity, Malam Garba Shehu, has said only President Muhammadu Buhari will take a decision on the fate of ministers who attended the send forth ceremony but later withdrew participation in the coming primaries of the ruling party.

He said this in response to an enquiry from  yesterday.

A text message sent to him read: “On Friday, the President bade farewell to ministers who had shown interest to run for elective positions in 2023. But a few hours later, some of the ministers who attended the ceremony made a U-turn and withdrew their participation in the party primaries.

“Some lawyers had said that it was illegal for them to return without being re-nominated by the president. Will the president re-nominate them for Senate screening and approval?”

Atiku To Buhari: You Lack Capacity To Grow Our Economy