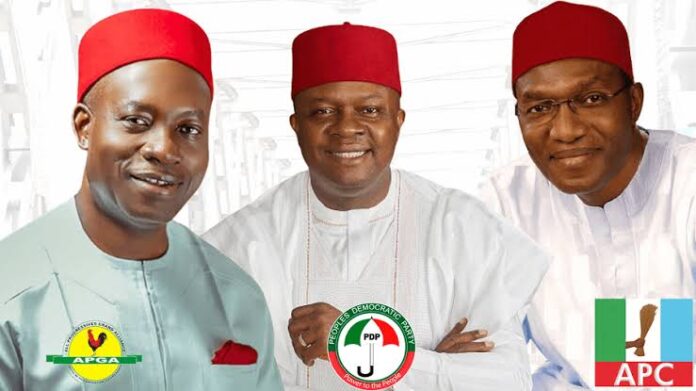 Having said this, I want us
to do review of what happened last year in Edo state gubernatorial election.

Edo state gubernatorial election was held on September 19 2020, under a very intense bickering and tirades.

Recall that before the election, there were issues regarding the candidacy of Governor Goodwin Obaseki in his party of origin as the incumbent governor. Many bigwigs and stalwarts of the party fell out with him because they felt that he was a threat to their ambitions and that he wasn’t serving the interests of some members of the party. Some got disenchanted with him and tried to edge him out of the party which they actually did.

Some said that, they would give him an #Ambode’s treatment. He was intentionally manipulated and rigged out of the process by his own godfather who happened to be the national chairman of the party at the time.

As a result of this, overtures were made to him in the opposition party and he made his way in there and ran his candidacy on the party platform and subsequently win the election that was keenly contested. His winning was a rude shock and quite mesmerising to those who fell out with him.

Those big men who felt he couldnt win the election without them including the imported big politicians from Lagos became ashamed of their doings all through the process because, whom God has destined, he has destined.

They thought they were undoing Gov, Obaseki political career just like they did to Ambode but they do not know that the electorates have lost their confidence in them by their own doings. Some of them were able to win election as far back as 1999 when there was no civilization about our democracy and failed to understand that we are no longer in that era and that our democracy has evolved over the course of time. They may not be able to win even a councilor ward 30 election if they contest today. Their political personality and aura had withered away but still think they hold sway in politics.

Even though, some of us believed that, all politicians are same, we also do believe still, that there are few of them who have some iota of trust of the ordinary citizenry and it takes only a good products to package a product in a good way. Unfortunately, the products that packaged the APC product in that election had no good perceptions about themselves in the eyes of electorates.

That is why ,’edo no be Lagos; became the household slogan in Edo state election a year ago.

Same thing with #Anambra state election which is 98percent concluded.

It came again with the same vibes of “Anambra no be Imo’ which also connote that, the campaign manager of APC candidate in the election that took place on Saturday didn’t do well in his own state to win any affection for his APC candidate not to even talk of vouching for the man standing for election.

See also  Nigeria Is The Highest Importer Of Phone Charger

The Anambrarians have said many times without number that they can’t afford to have another of his kind in the south Eastern Region.
Some called him “Supreme court governor” and referred to him all kinds of uncanny names.

Even the ruling APC didn’t do well to have appointed some one whose emergency as Governor of his state, is through the manipulation and subversion of the judicial process. Such a man doesn’t have to do much work to win people’s love and affection because, he believes that, even though he didn’t win at the poll, he is sure to be favored by the Cash and Carry Court of Nigeria. Such a man doesn’t believe in free fair elections because, he knows that he would resort to “scheming and gimmicks” to swindle and subvert the judicial process. That is why he was busy disputing the election credibility all over the media even when the election was yet to begin.

His types are not one in Nigeria – they are many.

Even the political pedophile in my state whom the youths of Nigeria have already elected as president according to him, in wildest imagination, and his recruited data boys who knows how to win election on social media and not in reality, is also one of his kind. And I’m writing this in response to one of his data boy who insulted me on koginewsreport yesterday. I wish he reads this too.

Back to Anambra election.

Each time such a manager is seen on the podium packaging and canvasing support for a candidate, a particular perception of him popped up in the minds of the electorates and that will defeat any vestige of credibility that the candidate himself may have built over the years. The candidate himself may not be a bad one but a bad packager may do much damage to a good product just as good manager could do good to a bad product. People rejected his face. They cant stand to bear the sight of him and even those who stand openly with him do so for the gains of the moment. They hates him with such a passion.

The issue here is the issue of, the name and the antecedents of the manager.

A good manager is like a fragrance that permeates every nook and cranny of the room but a bad manager is a hindrance.

Even though, the winner of election in Anambra state is half declared, we already know the winner and we all stand in solidarity with Anambra state electorates and we also urge them to go out peacefully today to cast their votes.

I think we two or more elections coming up between now and 2023, Osun state and Ekiti state governorship election and I believe, APC would do the needful

The Misconception That Only High Level Education Is A Guarantee For...