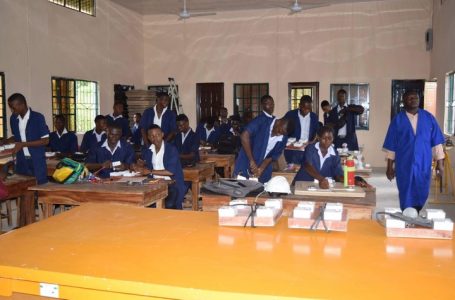 Ahead of the inauguration of the three newly established Technical Colleges across the state, the Commissioner for Technical Education, Hon. Princess Shola Daibo has commenced an inspection tour of the facilities.

The Commissioner who flagged off the tour with a visit to the Asaba Technical College said the visit arose from the need to ensure that everything is in place and is ready for inauguration.

Speaking further, she said that given the passion of the Okowa led administration to leave behind a Stronger Delta by building a technically oriented state, informed the decision to setup technical colleges in each of the 25 local government areas of the state and the inauguration of the 3 newly constructed ones would bring the number of functioning technical colleges to 9.

She said that the remaining colleges were in various stages of completion and expressed optimism that the colleges would be completed before the expiration of the current government.

She said the newly built schools had already commenced operation with the teachers resuming on Monday and further said that when all administrative checks had been put in place, admission of students would take place and the schools would commence full operation.

Hon. Daibo expressed satisfaction with the level of job done in the school, but however pointed out some errors in the finishing touches to the facility and called on the contractor to effect corrections to those errors before the inauguration by the end of the month.

Caption: Delta State Commissioner for Technical Education, Hon. Princess Shola Daibo, leading a team of inspectors from her Ministry, on an inspection of the Asaba Technical College, Asaba, yesterday.

Lagos State University Ranked Among The First 600 Universities In The...