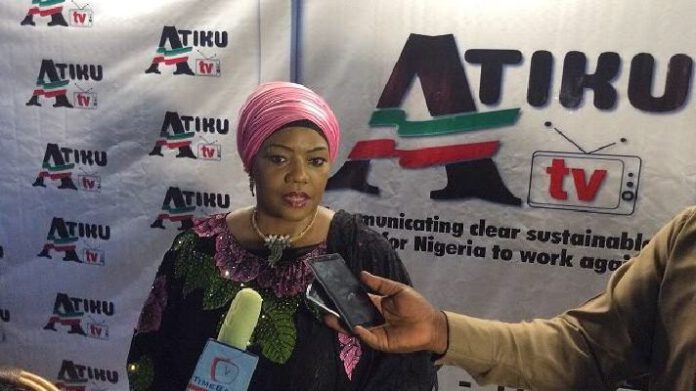 Former Vice President, Atiku Abubakar, has launched an online television that will henceforth propagate his social and political activities.

The event took place at the Five Star Bristol Palace Hotel, Kano, where a video clip showed the former vice president speaking on his vision and aspiration.

Atiku was represented at the occasion by one of his sons and political allies, particularly PDP members.

Baraka Sani said the ‘Atiku TV’ is a new approach that will change Atiku’s mode of reaching out to people from analogue to digital, henceforth.

She explained that the contents (about Atiku) for the television will be developed in YouTubes and circulated on the cyberspace, via WhatsApp, Facebook, Twitter, Instagram and other platforms of the new media.

“In developed countries, people sit in their homes and watch campaign plans of candidates on the television; you must not carry hundreds of vehicles and begin to move from one village to another, and from house to house.

“The digital campaign sets the records of your campaign promises straight, so that people can hold you responsible when you fail to deliver on your promises.

“Most Nigerian politicians go to elective office empty headed, that is why you hear of several blames when things fail to work as expected,” Gwarzo said.

Senior Special Assistant (SSA) to Atiku on Youths and Strategy, Dr. Ahmed Adamu, said: “Today, everything is online. The voting population is also moving online. So, if you are a politician, candidate or public figure with a vision or anything you want to share or sell, the best platform to reach out to the people is the digital space.

He added: “We have over 130 million Nigerians on the internet, which is more than the votes required to win the presidency of Nigeria. And Atiku has a great vision for Nigeria. What he might lack is reaching out to the people, to really understand his vision. So, Atiku Tv is a channel to educate Nigerians about his vision.

“Atiku has set the bar high as a credible candidate with great vision no other candidate ever had. The bar he has raised is so high that any other candidate that is coming must try to be like him or to do more than he does. And that is the kind of president we need in Nigeria, because leadership is about vision.

“We may not believe in a leader’s vision but the leader believes in his, while leading people when he gets to power. Atiku TV is therefore, a channel to broadcast, share and educate the people about Atiku Abubakar, his personality and vision. Many people know Atiku only as a politician; they know less about his vision,” he said.

Adamu, who denied that the Atiku TV was launched with an eye on 2023 presidential election, however, stressed that Atiku, may contest, if the security and economic challenges of the country persist.

“We are not promoting Atiku’s presidential ambition, because it is not yet time, and Atiku is not desperate for a political position. He is concerned about Nigeria and its future.

“But the problems that Atiku saw in the past are still unsolved. And if Nigeria has not reached the level of prosperity it desires, he will not rest. He was lucky to attain education and positions, but what about others who are not privileged? Atiku is doing it for the underprivileged, especially the youth.

“So, as long as security and economic challenges keep persisting, I think Atiku will be willing to throw his cap into the ring once again to savage the situation in the country,” Adamu said.

Giant Project: Where Is Your Money Coming From, Secondus Asks Umahi

2021 Budget: Ministry Of Works To Spend N1bn As Consultancy Fees