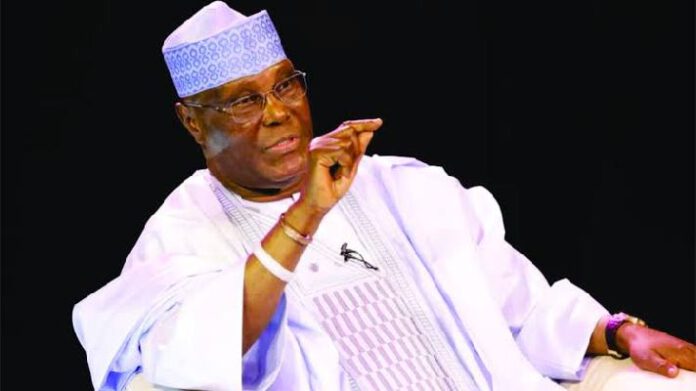 Following the emergence of former Vice President Atiku Abubakar as the presidential candidate of the Peoples Democratic Party (PDP), some stakeholders of the party are demanding the resignation of Senator Iyorchia Ayu, the party’s national chairman.

Some stakeholders of the party, who spoke with News Desk Paper, said based on the PDP’s zoning arrangement, both the national chairman and the presidential candidate cannot come from the same zone.

Others also said during the meetings with PDP governors that led to his selection as national chairman, Ayu was made to sign an undertaking that if the presidential candidate emerges from the North, he will resign from his position to pave way for a new national chairman from the South.

Speaking in an interview shortly after his emergence as national chairman, Ayu had said he is ready to make sacrifices to ensure the PDP wins in 2023 and will gladly step down if the party asks him to do so.

He said, “Luckily, party positions are not tied to the position of executive and legislative positions.

However, I’m a very democratic person and I will do everything to promote the interest and image of my party.

If the PDP says I should step down after a presidential candidate emerges and happens to be from the North, I will be very glad to do so because what we want is to take over the government and run the government in the interest of Nigerians. So, I’ll sacrifice anything to ensure that my party wins”.

A former minister from the South-South, who is leading the agitation for Ayu’s resignation, told Daily Independent that his group will begin moves to ensure that Ayu honours the agreement and resigns.

“We have written a letter to the national chairman yesterday reminding him of the pact he had with the party leaders if our presidential candidate comes from the North.

We will also begin to mount pressure on major stakeholders in the party across the country to ensure he abides by the agreement”, he said.

According to him, tampering with the existing party structures now can be catastrophic. “I don’t see activating it now. It has to be after the election. If we win, then we can do rezoning.

We can’t suddenly change the party’s structures when we are planning for a major election. That will be catastrophic”, he said.

Sharing a similar view, Jimi Agbaje, two-time governorship candidate of the PDP in Lagos State, also said it is not the appropriate timing to ask Ayu to step down at a time the party is preparing for a national election and governorship elections in Ekiti and Osun in few days’ time.

Then, he will step down. But it is not the right time for him to do so when we have elections around the corner.

“The present national chairman is just settling down to office. We have a campaign ahead and it is going to be a rigorous one because we are in the opposition.

Then we know that we have a sitting president from the North and a national chairman from the South”.

On his part, Kola Ologbondiyan, the immediate past National Publicity Secretary of the party, said there is no sacrifice too big to make on the part of the leaders in order to ensure victory for the PDP in the general elections.

“It won’t be a surprise because in the process of zoning the offices, I think part of the arrangement then was that both positions, that is, presidential candidate and national chairman will not be in a single zone.

“I do not know what the stakeholders of the party feel currently but I think that there will be no sacrifice that will be too huge to make in order for us to win the 2023 election.

If that happens, it will be a sacrifice in the interest of the party so that every group and zone in the party will be carried along”.

Also speaking, Prince Diran Odeyemi, former Deputy National Publicity Secretary of the PDP, said while it is true that Ayu will have to step down now that Atiku has emerged as presidential candidate, it is left for PDP stakeholders to decide when he will do so. “That is the normal and ideal thing that will happen.

My take is that the PDP is a political party that has arrangement. It is our internal issue that is not the affairs of non-PDP members.

The whole thing is a process. At the right time, Ayu will leave the stage since we now have a Northerner as our presidential candidate. “So, the chairmanship of the party will automatically come to the South.

When it will happen is what I cannot say now. But it is an arrangement that will and must definitely happen”.

Imo: We Must Reject Agents Of Anarchy – Yemi Osinbajo