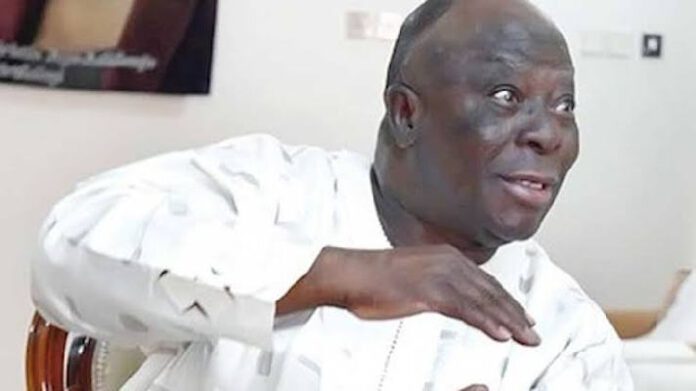 Leader of a leading Yoruba socio-cultural group, Afenifere, Chief Ayo Adebanjo, has called on President Muhammadu Buhari to, without further delay, break the country into its original units if he does not want to restructure.

Adebanjo told the Sun that anarchy looms in the country.

He emphasized that the constitution foisted on the people had been the cause of the nation’s problems.

The elder statesman said that Nigeria should be broken so that each group goes to its place and enjoy peace.

According to him, there has been disobedience to rule and illegal detention of persons who speak out against the government of the day.

“When a court gives an instruction, and you don’t obey; when you ask people to be detained without trial, you obstruct the rule of law? That is unfortunate,” Adebanjo said.

“We are moving towards anarchy, except we want to deceive ourselves. The court that is supposed to be the sanctuary of the common man has been desecrated, and yet the people who should protest keep quiet. We are already in anarchy.

“Have I not been vindicated? I have not changed from that position at all. Anarchy has taken over in this country.

“We must return the country to true federalism, where the regions should be autonomous, and let everybody be ruled according to the dictate of his place, then, this culture of autocracy and authority over everybody would be stopped.

“It is because of this culture of autocracy that the president doesn’t want to do anything to change the constitution.

“Since the president doesn’t want to go back to a constitution we agreed on at independence, it is better everybody goes to his area and enjoy peace.

“I have said it and I have challenged him and he has not denied, and I said why should he hesitate to go back to the constitution we had at independence, which was approved by Azikiwe, Awolowo and Sardauna, and I said, he can never be more intelligent, more educated than Sardauna, and he has not told us why he would not go back to that constitution.

“So, what is the problem, if he is serious about keeping this country together in unity, in peace? Let’s restructure and go back to true federalism and every other thing is just going round the clock.

“That is where I am; that since it has turned this way, let this country break and let everybody go to his place and have peace.

“I have told the president to go back to the interview I had with Vanguard before he was elected and I have been vindicated in all that I said in the interview.”