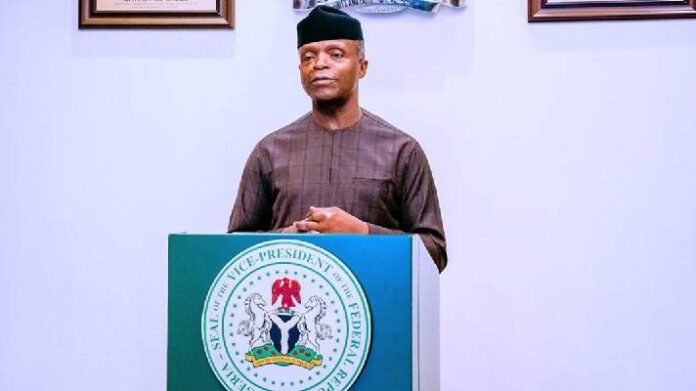 As a move to further boost economic activities in the Niger Delta, Vice President Yemi Osinbajo has said the current administration would complete the development of all the seaports in the area.

The vice president, at Gbaramatu Voice 6th Anniversary Lecture in Lagos said: “The theme you have chosen, ‘The Dwindling State of Crude Oil Demand in the Global Market: The Way Forward’, is especially timely. It is no secret that revenue from crude oil accounts for about 90 per cent of our foreign exchange earnings.

According to him, “the Federal Government is developing a number of deep seaports across the region, including the Bonny, Warri and Ibom Deep Sea Ports, among other development projects such as the establishment of Export Processing Zones to boost economic activities, which will be operational soon.

“In the last decade, we have borne witness to the revolution in tracking technology, which led to the Shale boom and the attendant decline in demand for our crude oil. In the past year, the impact of the COVID-19 pandemic has had an equally adverse impact on global energy demand and hence on our earnings.

“Thus, the current situation, more than ever before, calls for a creative and holistic approach to the task of fostering economic growth.

“Beyond its oil wealth, Niger Delta is incredibly blessed with diverse human capital across education, sports, technology, creative arts, entertainment, economy and many other sectors.

“Even before the onslaught of the pandemic, the imperatives before us had become clear and we had responded accordingly. Right from the inception of this administration, we have demonstrated a commitment towards the challenge of creating economic opportunities for our fast-growing population in a post-oil future.

“Our entire strategic outlook has been shaped by the concept of ‘Nigeria Beyond Oil’ – a paradigm that encompasses measures aimed at repositioning our economy by taking advantage of global trends in the energy sector.

“As part of our drive to encourage investments in gas production and optimize our nation’s enormous gas potential, the Federal Government declared the period of 2020-2030 as the decade of gas.

“To this end, last November, the Federal Government launched its National Gas Expansion Programme, a component of the Economic Sustainability Plan, which focuses on the distribution of Compressed Natural Gas, CNG, and Liquefied Petroleum Gas, LPG, across gas stations operated by Nigerian National Petroleum Corporation, NNPC.

“By the end of this year, this administration will commence distribution of CNG as part of our strategy to gradually replace the high sulfur petrol. Our objective is two-fold.

“Concurrently, we have also invested significantly in Niger Delta as the region that holds the energy resources that have powered our progress for six decades as well as the keys to an emergent gas economy.”

“In 2017, following my tour of Niger Delta, which involved extensive consultations with key stakeholders in the region, the New Vision for Niger Delta was birthed in response to the various challenges, which had been plaguing our people.

“The objective of this New Vision is to ensure that the people of the region benefit maximally from their wealth, through promoting infrastructural developments, environmental remediation and local content development.

“The remediation exercise happening in Ogoni land, under the recommendations of UNEP is another milestone we are proud to announce as an administration. The clean-up commenced in January 2019, with the handover of the first batch of sites to the selected remediation firms.

“A total of about 57 sites have so far been handed over to contractors by Hydrocarbon Pollution Remediation Project, HYPREP, under the Federal Ministry of Environment. It is important to note that the Ogoni clean-up is the first of its kind in the history of Niger Delta. Indeed, this is the first time the Federal Government is directly involved in remediation activities within the region.

“The Itakpe-Ajaokuta-Warri Rail Line project, which was commissioned by Mr President in September 2020, and has the capacity to handle both passengers and freight services, is connecting several communities and promoting commerce within the region

“In 2018, the National Universities Commission, NUC, approved the commencement of undergraduate degree programmes at the Nigerian Maritime University in Okerenkoko, Delta State. President Buhari approved a N5 billion take-off grant to support this university, which happens to be situated in the great Gbaramatu Kingdom. The university currently has students spread across 13 undergraduate programmes in three Faculties, namely: Transport, Engineering and Environmental Management.

“In terms of addressing concerns around public safety and social security in the region, while ensuring peace and stability in the region, the administration has, among other things, sustained its commitment to the Presidential Amnesty Programme under which youths and ex-agitators are engaged in formal education, vocational skills acquisition and empowerment programmes that offer a pathway towards productive and dignified livelihoods.

“The cumulative effect of all these measures are certain to have a positive transformational impact on Niger Delta and on the future of our nation as a whole. This path of progress and prosperity is one that we will pave by maintaining the partnerships between the administration, the leaders of the region and the communities.”

The vice president commended the Gbaramatu Voice for organising the forum and for being one of the agents of change working for sustainable peace and progress in the Niger Delta.