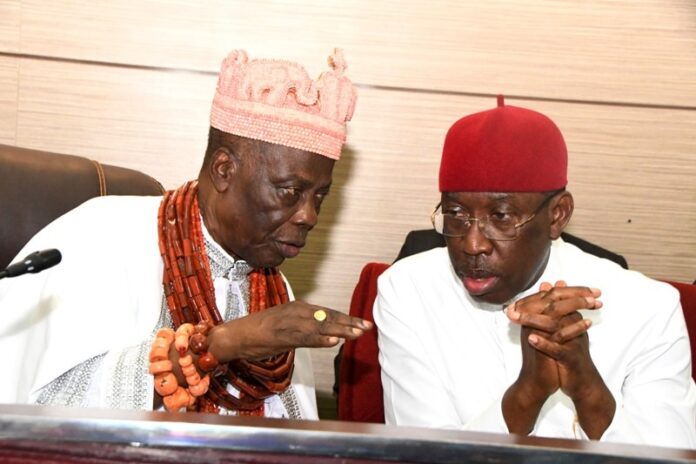 Governor of Delta State, and Vice-Presidential Candidate of the Peoples Democratic Party (PDP), Sen. Ifeanyi Okowa, has urged all Nigerians to brace up for rebuilding of the country, saying the task required the collective role of every citizen.

He said that Nigerians had a great role to play in living peacefully in unity as no meaningful development could take place without peace.

The made the call while addressing traditional rulers in the state at the Traditional Rulers Council Secretariat, on Thursday, in Asaba.

He commended the monarchs for ensuring that peace prevailed in their various kingdoms, and regretted that he had not been unable to meet them as regularly as he wished.

According to him, I have come before you to have a moment with you all because for some time I have found myself so busy, particularly this year that is an electioneering

He said “I must use this opportunity to thank all our royal fathers for the great role they play in their various kingdoms because I know that once it is well with all their kingdoms, it will be well with the entirety of Delta state.

“I always pride myself with the fact that Delta State is peaceful because our royal fathers are doing a great job in the state. Beyond the work that they do to keep their kingdoms as peaceful as possible, they have continued to pray for our state.

“I cannot ignore the role our Royal fathers have continued to play in ensuring peace in our state,”

He lauded Delta monarchs for the bond that exists amongst them which according to him had translated to the peace that pervades the entire state.

“Your Majesties, you have continued to draw yourselves to each other and when you continue to bond amongst yourselves, you are actually bringing an everlasting bond amongst our people in Delta State.

“So I truly want to thank you for all that you have been doing to ensure peace and unity of our people because without peace and unity, it will be difficult to develop our state.

“I want to use this opportunity to appreciate all our Royal fathers for the support that you have given me for almost seven and half years now,” he said.

The PDP Presidential running mate urged Nigerians to live in peace in order to help in rebuilding trust in the nation.

“We had a very difficult beginning in the state but things have continued to improve even when we would have had more if the economy was good in our nation today.

“I see the brotherhood and love between the traditional institutions in this state and it gladdens my heart and I hope that every state is able to emulate this and that if we can come together as a people and stay on the part of justice, we would be able to take ourselves out of where we are today.

“Every Nigerian should realise that we have individual and collective roles to play in order to rebuild the foundations of our nation,” Okowa said.

Earlier, Chairman of the Delta State Traditional Rulers Council and Orodje of Okpe Kingdom, HRM Orhue I, said traditional rulers in the state were grateful to Governor Okowa for his unparalleled support for the traditional institution in the state.

They pledged their continuous support towards the governor’s stronger Delta vision.

7 Foods That Will Make You Enjoy Sex And Last Long...