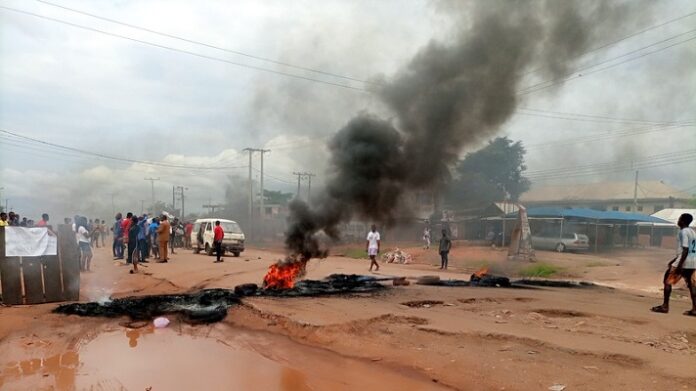 Elders, Chiefs, Women and Youths of the host communities, trooped out in their numbers protesting, which led to the blockade of the entrance of Pan Ocean Oil Corporation Company at Owa-Alidinma Community in Ika Northeast Local Government Area of Delta State.

Speaking to newsmen, the spokesman of the host communities, Mr John Iewzu, said that their reason for the peaceful demonstration was that Pan Ocean had been neglecting and intimidating them by not fulfilling all the promises they made to them since October 2019 to date.

He noted that there was a meeting the host communities held with Pan Ocean which took place on Wednesday, February 17, 2021 and it was agreed on the implementation of the full payment of all arrears and interest accrued to them between October 2019 to October 2020.

He pointed out that other issues that were also discussed at that meeting were the payment of new salary scale for the communities’ workers, commencement date for the implementation of scholarship scheme and graduate trainee, viz-a-viz modalities for selection, communities work force in all the department of OML 147 and other important issues.

Continuing, he stressed that during the meeting, an agreement was reached with Pan Ocean to fully pay all the arrears and interest as mentioned, saying since that time till date, no single effort was made by the company to implement any of them, not even increasing the salaries of the communities’ workers in the company.

He stated that the host communities had on several occasions, written letters to the management of the Pan Ocean itself, Delta State Ministry of Oil and Gas, Delta State Government and other relevant authorities, stating their demands and their grievances, adding that nothing was done by Pan Ocean to fulfill her promises to them.

In his response, the General Manager, Pan Ocean Oil Corporation, Mr Collins Atikube, appealed to the protesters to bear with them, saying that his company’s inability to implement and fulfill their already signed MoU was due to the effect of the COVID-19 pandemic. He, however, assured them that his company would fulfill all the outstanding promises by June this year.

9 Things To Consider While Searching For Your Partner