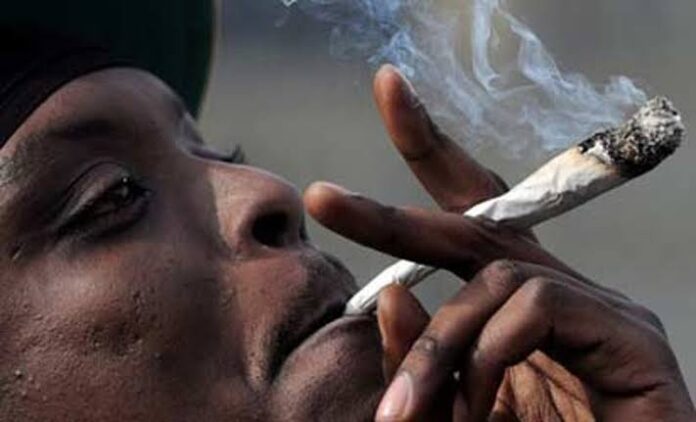 Marijuana commonly known in Nigeria as Indian hemp, weed or Igbo, marijuana is a generic species of plant with compounds consisting of sativa. Its psychoactive properties, together with its mental and physical effects, endears it for medicinal and economic use.

It is typically used for smoking, cooking, paper and fiber production, and its side effects, short and long term, include heightened paranoia, anxiety, impairment of physical coordination, increase in appetite, decreased mental ability, alertness and disorders.

It is illegal to possess or use marijuana in Nigeria, in accordance with the Dangerous Drugs Act. This law specifically lists Indian hemp ‘as a dangerous drug stating that the term refers to any plant or part of a plant of the genus cannabis’.

The Indian Hemp Act further clarifies the situation stating that possession of the substance is an offense, which can be punished with imprisonment for a term of not less than four years.

However, if the offender is 17 years or under, the sentence is adjusted to 21 strokes of the cane, plus two years in a borstal or similar institution, or a fine of 200 Naira.

Notwithstanding the prohibition of planting, cultivation, sale, import and export or use of cannabis in Nigeria, experts have argued that it could be of benefits to the Nigerian economy.

Mr David Ogana, who is an economic consultant, spoke to our correspondent during an interview, stated that, with appropriate legislation and careful control, legalization of marijuana could become a significant contributor to Nigeria’s Gross Domestic Product (GDP).

He believes that paper production from hemp would eliminate the need to chop down billions of trees, stating that, millions of areas of forest and huge areas of wildlife habitat could be preserved.

See also  Us Election: Chinese Government Yet To Congratulate Biden

“Hemp can also be substituted for cotton to make textiles. Hemp fiber is stronger than cotton and can be used to make all types of clothing.”

“Hemp based material can be used to replace wood has much lower manufacturing costs. The hemp material is stronger, lighter and more durable than wood,” Ogana stated.

He, however, expressed concern saying that, it would be difficult to justify its production in today’s Nigeria where there is a virtual breakdown of societal norms and unmitigated violence on a daily basis.

“In those countries where it is legalized, there are legislations and strict regulations pertaining to its distribution, sale, possession and use, including certification,” he added.

Another respondent, Mrs Jane Ovie, a pharmacist, stated that the legalization would be beneficial because marijuana can be used to produce hair creams, medicinal purposes and as a recreational drug.

“Physiological, cannabis causes euphoria, relaxes the muscles and increases appetite. On the downside, the overuse of the drug can impair motor skills, cause anxiety and paranoia and decrease short-term memory,” Mrs Ovie.

She stressed that, as an illicit drug by law, it had always been an offense in Nigeria and it has largely been frowned upon by society.

According to her, Nigeria would be short-changing itself by not tapping into the economic value of marijuana, adding that, the enterprise under the supervision of the national Drug Law Enforcement Agency, NDLEA, would create thousands of jobs for Nigerians and it would also spur economic diversification if considered by the federal government.

A respondent, who spoke on condition of anonymity, refuted the legalization of marijuana, stating that the disadvantages would override the advantages.

See also  Obaseki To Buhari, It's Immoral To Return To APC

He believes that legalization of marijuana would destabilize people especially the youths and it would not favour the economy in any way.

“The impact will be grave; we have a country full of unemployed youths and implementing it will increase the number of mad people on the streets.

“We already know that people use it secretly and the menace it has caused is evident; it will end up having a drastic negative effect on our country as a whole,” he said.

He stated that, Nigeria should not emulate the western world in legalizing marijuana because, in his word: We don’t have the right bodies to regulate and supervise its usage. It will not favour our country. “

Mrs Uche Okonta, a public servant, added that, it would not be advisable to legalize the plant for routine consumption in Nigeria because of poor monitoring and evaluation.

“People who promote it sell all types of information and myths, such as that it is a healthy plant; that it is in the scriptural, just to make it seem acceptable,” Okonta remarked, claiming that 80 percent of youths found in the psychiatric ward was as a result of abuse of hard drugs.

“Imagine legalizing Indian Hemp in a country where the population of youths are more.

“We can already see the damage it has done to those taking it secretly. The country will be a total disaster when it becomes legalized.

“Irrespective of the economic and medicinal advantages, the disadvantages will be greater.

“I err on the side of caution and join the voices against it,” she added.

She however, stated that the use of cannabis needs more local research to evaluate its use in Nigeria, conceding that if it was to be encouraged, there was need for very strict regulations.