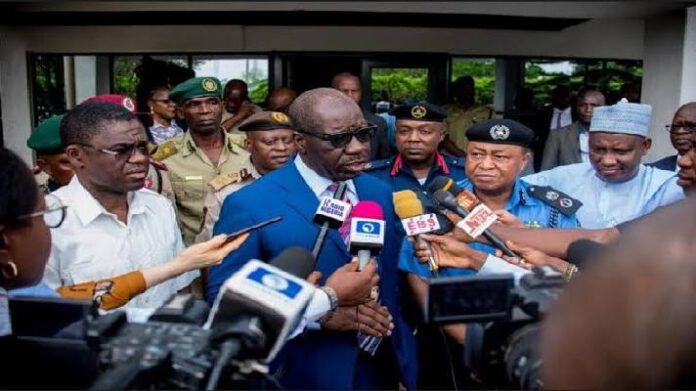 Barring any last minute changes, Governor Godwin Obaseki will today formally announce his mem­bership of the Peoples Democratic Party (PDP) a few days after resigning from his party, the All Progressives Congress (APC). ­

A member of the party’s National Working Committee (NWC) told our correspondent that the governor would reg­ister his membership at his Ward 4 in Oredo LGA of the state after finalising talks with PDP leaders at the national and state levels.

Obaseki, on Wednesday, met with the leadership of the PDP, led by its national chair­man, Prince Uche Secondus, in Abuja, as well as other gov­ernors elected on the party’s platform.

The meeting, which was held at the residence of Gov­ernor Nyesom Wike of Rivers State, also had in attendance Governor Aminu Tambuwal of Sokoto as well as other gov­ernors of the party.

“Governor Obaseki will pick up his card from his Ward 4, Oredo LGA, in Benin tomorrow (today).

“His return to the APC has been foreclosed due to the lat­est crisis rocking the party.

“The governor is currently meeting with the PDP nation­al chairman as well as other governors elected on the par­ty’s platform in Abuja; they have assured him of total support in his governorship bid,” he said.

SCAM ALERT: This House Located In Kwale Is Not For Sale...