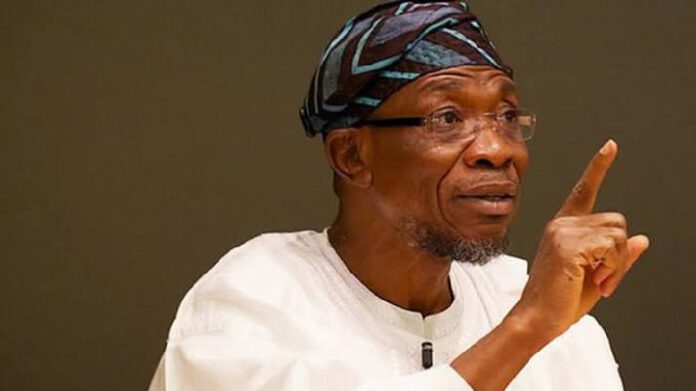 Rauf Aregbesola, Minister of Interior, has written to the Nigerian Governors Forum to request a meeting in order to decongest jails around the country.

This was made known to our correspondent by the Minister’s Media Adviser, Sola Fasure, on Tuesday.

In exactly one month, Aregbesola statedhe would meet with state governors to agree on the mass release of at least 30 per cent of convicts from correctional facilities across the country.

The minister said that the interface was necessary as more than 90 per cent of the inmates were being held for contravening various state laws, noting that over 70 per cent of the 75,635 inmates at present were awaiting trial.

He said that the federal offenders in the system were far fewer than 10 per cent, adding that the bulk of people in custody were those who had run afoul of state laws.

Aregbesola said that they were therefore being kept under the legal jurisdiction of their respective states.

The minister added that the decongestion of the 253 custodial centres nationwide was necessary as some of the inmates have no reason to remain in custody.

However, speaking on the action taken by the minister, Fasure said,“The minister has written to the Governors Forum, but he has not met with them because they will have to communicate with him and give him a date.

“He wrote to them with the request that he wants to meet with them, but he is yet to get a response. In other words, the meeting has not been held.”

Meanwhile, the Federal Government on Tuesday revealed that over 12,000 inmates were released from various correctional centres across the country within the last six years in line with the policy of prison decongestion.

The Attorney General of the Federation and Minister of Justice , Abubakar Malami, stated this to members of the Senate Committee on Judiciary , Human Rights and Legal Matters during 2023 budget defence session with the committee .

Malami, who made the declaration in response to question from Senator Ajibola Basiru ( APC Osun Central ) , said the Federal Government was able to decongest prisons across the country through policy actions aside from the Administration of Criminal Justice Act , meant for expeditious dispensation of Justice.

“When this government came on board in 2015, the problem of prison congestion was at the front burner of national discourse , which made President Muhammadu Buhari to set machineries in motion in different ways for required solution.

“One of such machineries set in motion was a presidential committee set up for prison decongestion which liaised with other stakeholders in the justice sector for way out .

“Aside from the committee, Mr President himself also wrote letters to the 36 states governors and Chief Judges of the states for required visitations to prisons and exercise of prerogative of mercies from time to time .

‘In one of such visitations made by the Governor of Kano State , Abdullahi Ganduje , about 500 inmates were granted pardon in one day, totality of which had led to release of over 12, 000 inmates across the country within the last six years .

“Special attention was given to awaiting trial persons who constitute the bulk of the inmates across the various correctional centres in the country by taking Magistrates and Judges to the centres for on the spot dispensation of Justice .

Earlier in his remarks , the Chairman of the Committee, Senator Opeyemi Bamidele ( APC Ekiti Central), said the 2023 budget estimates for the Federal Ministry of Justice and its agencies as contained in the Appropriation Bill submitted by President Muhammadu Buhari , is N71.291billion.

Killing Of Innocent People In Zamfara By Bandits Unacceptable – Buhari

Atiku Has Been Contesting For President Since 1992, He Should Rest...