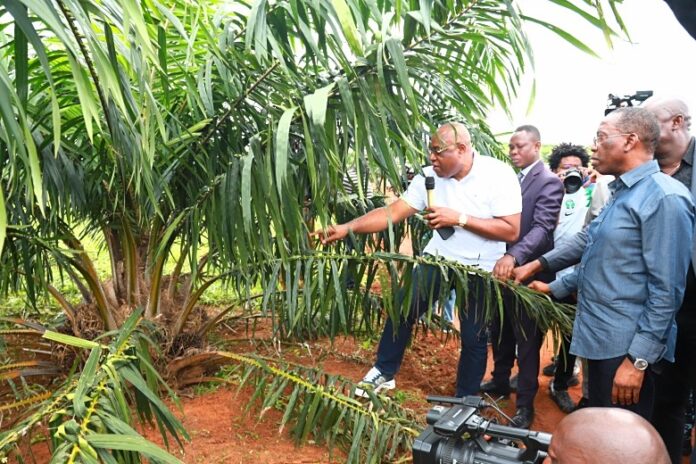 Governor Ifeanyi Okowa of Delta has called for more investments in agricultural development to curb rising food insufficiency in Nigeria.

He said that oil palm production was one area that wealthy Deltans and Nigerians could invest in to create job opportunities and economic development of the people.

Okowa, who is Vice-Presidential Candidate of the Peoples Democratic Party (PDP), made the call on Friday, after inspecting Oil Palm Plantation and Refinery under construction at Akwukwu-Igbo, Oshimili North Local Government Area of the State.

The project which is a joint venture between Northsworthy Farms and Allied Industries Limited and the Delta State Government has successfully planted over 250,000 oil palm trees in over 1,400 hectares of land.

Okowa stated that he believed in the partnership because it would help the immediate community and the environment, adding that currently, no fewer than 300 workers were engaged on daily basis on the project.

He commended the Management and staff of Norsworthy Farms, the Obi of Akuku-Igbo and the people of Illah for their support and cooperation towards the successful take-off of the project.

“Four years ago the management of Norsworthy Farms spoke to me when they were to commence and I thought it a worthy venture to have the state government stay supportive and in partnership with them to develop this oil palm plantation, now with a mill already being installed.

“We had some problems no doubt, but we thank God that our management team in the state government was able to walk around the corners with the various communities involved.

“Where we are now, is quite interesting because we have had the opportunity to go round the one thousand four hundred hectares of land, all planted with oil palm seedlings that have grown so much; some are already producing.

“As a state government we believe in this worthy partnership because beyond the fact that it will help to grow the economy of this environment and also help the immediate communities that are around here, we are very mindful of the fact that it is going to generate a lot of employment for our people.

“I have been told that on the average, 300 persons are working on a daily basis in this place and I believe that when the mill comes on stream, we are going to have more persons engaged.

“There is going to be a lot of multiplier effects and that’s what we are set out to achieve,” he said.

“In the partnership with Norsworthy, we are very mindful of the job creation effect and the fact too that they would be paying taxes at some point in time and that would help to also grow our internally generated revenue.

“The important thing is that, I discussed with the management of Norsworthy and they assured me that with time they are going to encourage out growers schemes in this place and get people outside the community to partner with them.

“This will help to increase the funding available to families who are ready to partner with the farm. And that is the key point in oil palm development.

“I believe that if we are able to ensure that partnership, a lot of our families will be much richer than they are now in the next few years,” the governor said.

He also said that the construction of the 13.5km Ugbolu-Akwukwu-Igbo Road by his administration would enhance quick access to the farm for the economic development of the area.

“We have also ensured that this place is not restricted by poor road access, we did our commitment by constructing this road which is about 13.5kms road and I have been told by the contractor that by December, he would have finished the road.

“I am glad to hear that Norsworthy wants to expand more and more and in partnership with the state government, they have gotten a land at Ubulu-uku. I am looking forward and hoping that they would even expand beyond that.

“I want to urge our people who are outside Delta state, who are Deltans, that there is still a lot of land to come in and invest and help create job for our brothers and sisters.

“I believe it is a form of giving back, for people to come back to their state and invest. So I want to truly appreciate you for deciding to return home to invest and add to the development of our state,” the governor stated.

Earlier, Managing Director of Northsworthy Farms and Allied Industries Limited, Dr Gabriel Ogbechie, had thanked the governor for his support and vision for the project.

He said that the project was conceived about four years ago adding that it was indeed a contribution to the agricultural development and food sufficiency need of the country.

He said the company aims to expand further with the acquisition of additional 600 hectares of land at Ubulu-Uku in Aniocha South Local Government Area.

How I Handle Betrayers – Tinubu

Buhari In A Hurry To Develop Nigeria – Ahmad Lawan