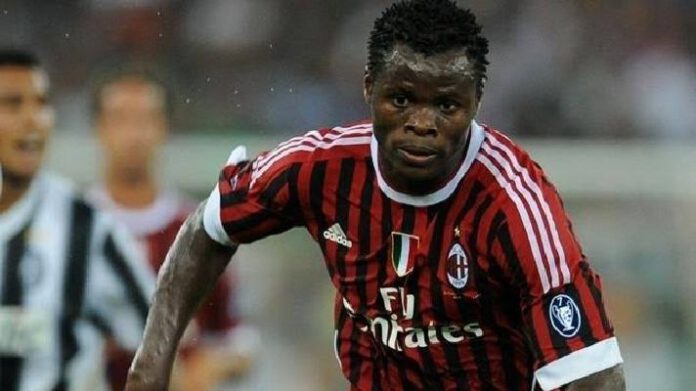 Former Super Eagles Star Taye Taiwo Put an End to Age Controversy ; My Twin is a Girl and not a Boy!

Former Super Eagles star Taye Taiwo has rendered the controversy surrounding his family and his age useless in his recent chat with veteran American based Nigerian Journalist Colin Udoh.

In the past, some sections of the African media have maliciously labelled the legendary ex-Olympique Marseille defender as an Age Cheat and they also cited an imaginary birthday event celebrated by an alleged Twin Brother of the 2005 FIFA U-20 Championship Bronze Ball winner.

When Taye Taiwo clocked 25, his alleged twin brother who doesn’t play football, Kehinde Taiwo was said to have clocked 37 but many years later, Ismaila who also featured for English outfit Queens Park Rangers have put the issues relating to his biological foundation to stable rest. the Lobi Stars powerful Left-Back explained that his twin is not a Boy but rather a girl.

“A lot of people don’t know about the trial of someone, they will just write about something that is not even important.
“When I was really young, my father told me that we are twins, the second one is a girl, my father told me that we lost her when I was still young,. How come since when I starts playing U-20, go to the World Cup, there is no even trace of my twin, then when I was in London, I remember I was in QPR in London, they start doing joke around me, even there is one journalist that even come training camp.
“See, I just want to ask couple of questions, I replied, what is that?
“Are you having a twin? I say what kind of question are you asking? I have!”

See also  FIFA: Okocha Is One Of The Most Electrifying Players In Football History

The 35-year-old represented the Nigeria senior national team 54 times and he was able to find the back of the net eight times spanning from year 2004 to 2012.