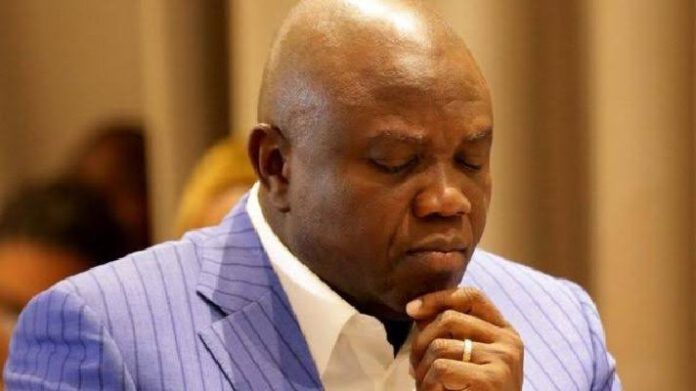 Below are the mouth watering benefits, anyone who served as governor of Lagos State will enjoy after office.

It was gathered that, the pension scheme for Lagos governors, was designed by the former Attorney General of Lagos State, under Tinubu, Prof Yemi Osinbajo, who is now the vice president of the country.

Lagos is ranked as one of the most dangerous cities to live in the world, due to the prevalent security threats, ranging from police brutality, harassment from street urchins, government officials, task forces and armed robbers.

Lagos also named as one of the most stressful state to live and conduct business activities due to traffic jam. The state also have one of the world’s worst inner city developments.

If you go into the interior parts of Lagos, the level of the under development will be exposed to you. From bad roads, infrastructural decay, poor education, no access to potable water, but the people running the state keeps branding it as a mega city.

Here are what ex-governors in the State, Senator Bola Tinubu, Babatunde Raji Fashola and Akinwunmi Ambode enjoys, in the midst of plenty poverty of the people.

1. 1 residential house each for the ex-governor and ex-deputy governor.

5. Free healthcare for him and members of his family.

12. 8 policemen, 2 DSS attached to the governor for the rest of his life.

However, Lagos State House of Assembly said on Sunday it would not repeal the state’s pension law which authorised former governors and other public office holders to receive juicy pensions from state coffers.

The Chairman of the House Committee on Information and Strategy, said the lawmakers would not go the way of their Zamfara counterparts which recently repealed pension law for its former governors and other public officials in the state.

The Federal High Court, Lagos, had last week ordered the Federal Government to recover pensions collected by former governors now serving as ministers and members of the National Assembly.

The court also directed the Attorney General of the Federation and Minister of Justice, Abubakar Malami, to challenge the legality of states’ pension laws permitting former governors and other ex-public officials to receive such pensions.

Braimoh, however, faulted the court ruling that ordered Malami to take immediate legal action toward the repealing of state laws that permit “former governors to enjoy governors’ emoluments while drawing normal salaries and allowances in their new political offices.”

He said as long as the law did not contravene the constitution, state assemblies had the right to make laws for the benefit of the society in which they operate.

According to him, separation of powers as enshrined in the constitution empowers the legislature to make laws, the executive to implement and the judiciary to interpret the laws.

“Therefore, legislators make laws that are in tune with the yearnings and dynamics of their society.

“Until another legislature comes to alter, review or amend the law, the law is meant to be obeyed.

“The judiciary cannot pronounce that law by the state is unconstitutional unless such state law is contradictory to the constitution.”