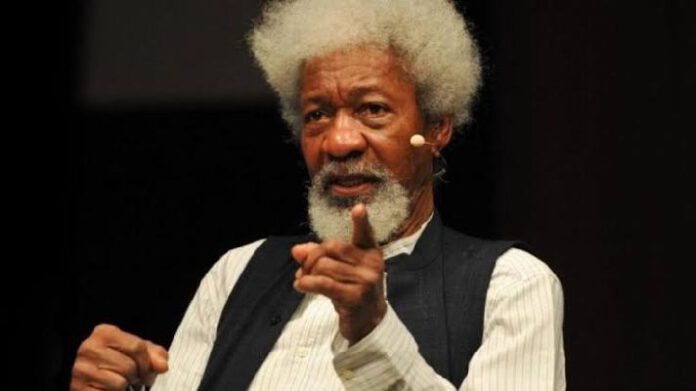 Nobel laureate, Prof. Wole Soyinka, on Saturday said henceforth, any state where the kidnapping of children takes place should shut down in protest against the act. Soyinka also advised that other neighbouring states, as a matter of solidarity, should join the affected states to shut down.

The playwright spoke shortly after an award lecture and public presentation of his new book, ‘Chronicles of the happiest people on Earth,’ in Abeokuta, Ogun State. The programme was organised by the Association of Nigerian Authors, Ogun State chapter, in collaboration with the Abeokuta Club.

More than 300 schoolgirls were kidnapped on Friday in Zamfara, the latest of such attacks, while 27 students were also abducted in Kangara, Niger State, but released after over a week later.

The octogenarian playwright, who lamented that the government and security agencies had failed Nigerians, said he didn’t know what else to recommend as panacea to the nation’s “abnormal times.” Soyinka added that such abductions were unacceptable and “drastic, meaningful measures” must be taken in unison.

He said, “I think we are reaching the point where, in any state, where any child is kidnapped, that state should shut down completely. And other states, in solidarity, should at least shut down some of their activities. It sounds extreme but, we don’t know what else one can propose at this particular time.Yes, life must go on but even those activities will generate and enhance our very existence.

“I think we have to take on a tonality of regrets, of the unacceptable, protestation and mobilisation on whatever level it is possible as a community of human beings. ‘We shouldn’t wait for an enemy, faceless, airborne, unpredictable enemy like COVID to make us shut down. In protest and as a statement of the unacceptable, we are shutting ourselves down until this situation is resolved.”
‌
He added, “The abduction of our children, when will it end, how will it end? I don’t think any of us can tell. But it is important that we continue to stress and to remind ourselves that, not only are these abnormal times, but it seems to be, to me anyway, times of the shirking of responsibility in very key areas. We cannot permit ourselves – we just cannot – continue in this fashion. Something drastic, meaningful has to take place, and it has to be collective.

“This is no longer the responsibility of those at the top who are supposed to be in charge of security, in charge of governance; they have clearly failed the populace. They’ve failed us. There is no point in trying to reason it out, to find excuses, to lay blame. The important thing is that we are very close to accepting a culture of the unacceptable.”

2023 Presidency: We Are Waiting For Tinubu To Decide – Akeredolu