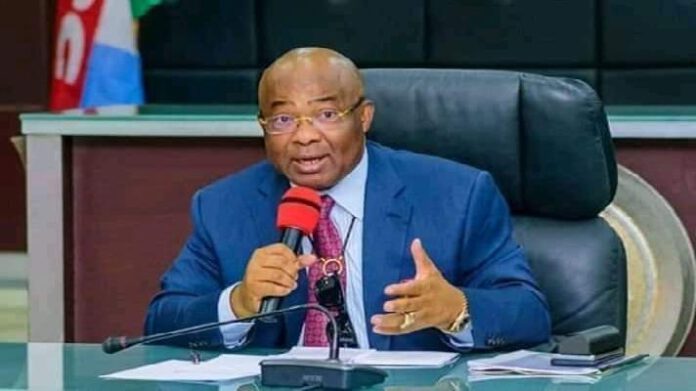 The Governor of Imo State, Hope Uzodinma has disclosed that the state-owned Imo State University (IMSU) will be renamed to Mallam Abba Kyari University saying that the late Chief of Staff died as a patriot.

This was revealed via a statement signed and released Today, April 20 by the Chief Press Secretary/Media Adviser to the Governor, Oguwuike Nwachuku.

The Governor made this call when the management staff of the university led by the Vice Chancellor, Prof. Adaobi Obasi paid him a visit at the Executive Chambers of the Imo State Government House.

The Governor went on to say that Mallam Abba Kyari played a pivotal role in the liberation of Imo State and no gesture is too big for a man who died as a patriot.

The Governor also said that consultations are underway with relevant stakeholders both in the education sector and in the State to critically look at the situation and take a decision.

The Governor urged the management staff of IMSU to live up to expectation, while pointing out that his Administration is very committed to quality education in the State and that Imo State University as the epicenter can not be left behind.

The University management through the VC commended the Governor for a job well done so far. She also called on all and sundry to support His Excellency to succeed.

It is yet to be seen, how stake holders and the people of Imo State will react to this recent development.

See also  You are A Liar, You Only Have Malaria Not Covid-19- Pastor Giwa Tells Akeredolu
ADVERISE HERE

FG To Fence University Of Maiduguri With 64 Billion Naira

Yahaya Bello Did Not Withdraw Support For Tinubu – APC

Over 1 Million Jobs To Be Created From Digital Switch-Over –...