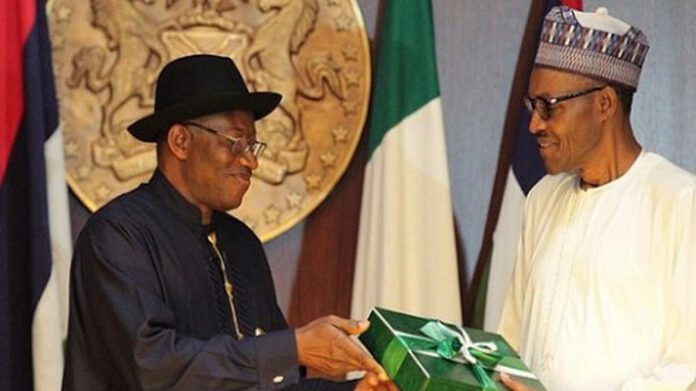 Chief Olu Falae, a former National Chairman of the Social Democratic Party (SDP) and one-time Secretary to the Government of the Federation (SGF), and Chief Olabode George, a former Deputy National Chairman of the Peoples Democratic Party (PDP), have advised President Muhammadu Buhari to dust up the 2014 Na­tional Conference (Confab) report for a guide on tackling the current security situation in the country. ­

Even though former Pres­ident Goodluck Jonathan handed over the report to Buhari in May 2015, saying it was the most important docu­ment he was handing over to him, President Buhari said he would not implement any of the report, saying it is meant for the archives.

Speaking with Daily In­dependent, George, who said Nigeria was at the precipice, said the president must use the remaining three years in his second term to urgently address the issue of restruc­turing, especially creation of state police, to address the security challenges across the country.

On his part, Falae, the for­mer presidential candidate of the defunct Alliance for Democracy (AD) and the All Peoples Party (APP) merger in the 1999 general elections, said leaders of the ruling All Progressives Congress (APC) who were saying former Pres­ident Goodluck Jonathan set up a booby trap for Buhari with the conference were not sincere.

He said the 2014 National Conference report was the key to the future of Nigeria if it is to be saved from explo­sion.

Falae, who noted that the resolutions reached at the Confab already contained the much-talked-about so­cio-economic and political restructuring needed for Ni­geria’s progress, added that the report of the 2014 National Conference contained sever­al resolutions and remedies that, if implemented, would tackle the upsurge of insecu­rity, banditry, and other vices bedevilling the country.

“They said Buhari is avoid­ing Jonathan’s booby traps and so he pushed the report to the archives. What is his own solution to the problems confronting Nigeria today?

“Avoid the booby traps but agree that there is a problem because that was why your party, the APC, set up a com­mittee on how to have true federalism.

If you can’t implement the 2014 conference report, why are you not implement­ing the one set up by your party?

“Don’t you know that im­plementing that report will take many years and several governments and that, there­fore, somebody has to start?

“Why can’t Buhari start it and let successive govern­ments carry on and finally conclude it? What is wrong with that? They have no an­swer.

“That report of the 2014 Confab is going to be the future of Nigeria because during the Confab we had discussions and listened to one another on issues and we agreed on a consensus,” he said.

On his part, George, who is the Atona Oodua of Yorubal­and, said the time had come for Nigerians to forget about their political, ethnic or reli­gious divide and join hands to see how the country could be restructured.

That, according to him, was the only way to save the country from total collapse.

He said: “I am not talking as a PDP man; I am speaking as a Nigerian. At 75, if I can’t speak the truth to power now, then what am I living my life for?

“Number one, the struc­ture we are using as a nation is very, very defective. We are more than 200 million in pop­ulation. The total number of policemen we have is 400,000. How can that be effective?

“There is a need for us to have state police for effective management and protection of the lives of the people.

“The need to have restruc­turing is now. We cannot post­pone it and we cannot contin­ue to run this country under the present arrangement.

“So, the last two years of President Buhari, he must use it to see how best he can restructure Nigeria. He shouldn’t push the issue of restructuring under the table.

“The system is not working and has collapsed. We are at the precipice of total collapse.

“The last two years for him is to address the issue. Restructuring is the most top­ical issue in the country today.

“There is a constitutional report that deals with a lot of this issue; let him open it up and forget about playing dirty politics.”

George also appealed to the Federal Government to do more in the area of food secu­rity, saying many of those en­gaging in criminal activities were doing so because they were hungry with no hope of where the next meal would come from.

He said while the Federal Government was spending money on physical security such as procuring fighting equipment, it must also do­nate a substantial amount of money to getting youths engaged so that they can be beneficial to the society.

“Security is not only about physical security, there are so many aspects of security and it is the combination of all that you just refer to as na­tional security.

“You have food security to guarantee that every Nigeri­an must be able to find some­thing to eat every day.

“There is public health se­curity which guarantees that anybody who is sick will be able to get treatment in any clinic.

“There is transportation security which ensures that those providing public trans­portation don’t misbehave or drive carelessly to injure their passengers.

“Number four is physical security, safety of lives, that people can sleep well at night without marauders, that peo­ple can travel long distances without being kidnapped, and armed robbery. The most im­portant of this is food security.

“What is causing those people to be engaging in what they are doing? Joblessness, lack of half a meal per day.

“I have gone many times from Kebbi to Sokoto; from Sokoto to Zamfara; from Zam­fara to Katsina; from Katsina to Kano; from Kano to Kaduna.”

God Gave Adam A Job Before Giving Him A Wife –...