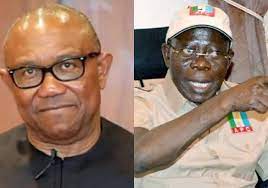 Comrade Adams Aliyu Oshiomhole, the deputy director general of the APC’s presidential campaign, has attacked Peter Obi of the Labour Party for portraying himself as a wise leader who has conserved money for Anambra State, News Desk Paper Report.

In continuation of his ward-by-ward campaign for Tinubu’s presidency and his own Edo North Senatorial ambition, Oshiomhole issued this challenge to Peter Obi at Owan LGA in Edo State.

Speaking with facts, he urged Nigerians to name one historic legacy of infrastructure that Peter Obi started and completed as executive governor of Anambra State, one hospital or stunning school that fulfills all international standards.

A governor cannot claim to be a democrat if he refused to hold local government elections for eight years until finally doing so a few months before his departure.

He said that Peter Obi had hidden all the funds intended for local government administration in Fidelity Bank, where Obi had a financial stake, and had utilised the proceeds to expand his own personal company.

Oshiomhole really exposed Obi and his dishonesty in trying to convince the public that he was a responsible administrator while in office. According to a respondent from the audience, this typically shows Peter Obi was covered in dishonesty, which is why he was unable to develop Anambra and instead left it in a mess.