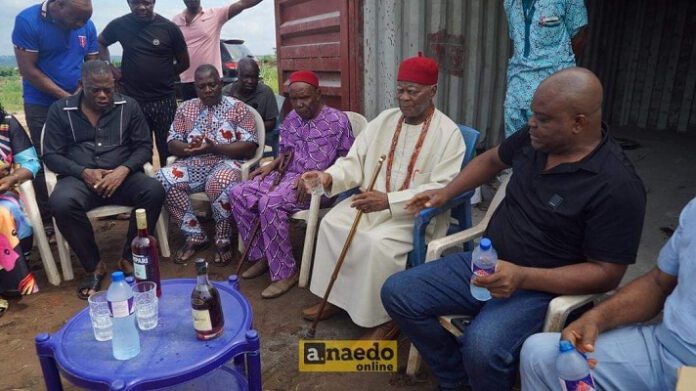 Endorsing the expansion plan Tuesday, May 26th 2020, Igwe Kenneth Orizu commended the Chief Executive Officer of Innoson Vehicles, Chief Innocent Chukwma (Ifediaso Nnewi) for seeing the need to build the extension of the factory in Nnewi.

He said that the expansion plan of Innoson Vehicle Manufacturing (IVM) will bring more development to Nnewi especially in the expansion of economic activities.

He noted that the expansion will also generate direct and indirect employment opportunities within Nnewi and environs, which will further bring Nnewi to the limelight. He emphasised that since his ascendancy to the throne, he has continued to advocate for think-home philosophy among Nnewi indigene who plans to make any investment.

Inspecting the progress of work in the new site, Igwe Nnewi blessed the new site, praying that Innoson Vehicle Manufacturing (IVM) will continue to improve in all standards.

On his own part, Chief Dr. Innocent Chukwuma appreciated Igwe Dr. Kenneth Onyeneke Orizu (III) for his prayers and encouragement. He said that despite the offers he got from different parts of the country for the building of the extension of the factory, he insisted that building the extension in Nnewi is the best bet.

He assured Igwe Nnewi and his entourage that he will continue to do everything possible to ensure that Nnewi is developed further.

How To Travel From Lagos To Benin Republic

How To Properly Use Spices

Petrol Price May Rise As Brent Stabilises Around $35/barrel