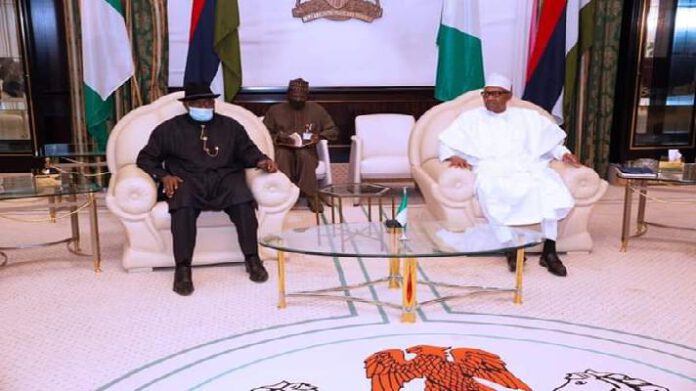 Ex-President Goodluck Jonathan on Tuesday paid a visit to President Muhammadu Buhari at the presidential villa in Abuja.

The visit comes three days after Buhari named the railway complex in Agbor, Delta state, after his predecessor.

Speaking to journalists after the meeting, Jonathan commended Buhari for naming the railway complex after him.

He described the move as a “good gesture”.

The line, which was started in 1987, was built to move iron ore from the mines around Itakpe to the steelworks at Ajaokuta, Kogi state, but was abandoned for many years before construction resumed during Buhari’s first term in office.

Jonathan described the completion of the project as “the way to go”.

According to him, “it shows that the president is going on with the legacy projects of previous administrations”.

“Let me use this opportunity to commend Mr President publicly. I have already sent a letter to him appreciating that it is a good gesture,” Jonathan said.

“Completing the railway programme is good. It shows that the president is going on with the legacy projects of previous administrations and that is the way to go. I appreciate it and I thank Mr President.”

The former president paid his first visit to Buhari during his second term on October 10.

He also visited his successor on January 30.