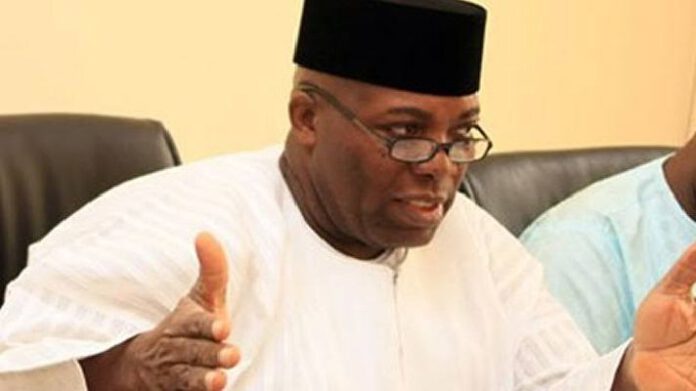 Controversy has continued to trail Thursday’s expulsion of the Director General of Peter Obi Presidential Campaign Council, Doyin Okupe and 10 other members of the Labour Party over alleged “non-financial membership status, political rascality and misappropriation of funds.”

The sack of the affected LP chieftains was announced by the leadership of the Ogun State Chapter of the party at a conference held in Abeokuta on Thursday.

But barely an hour after their dismissal, the National Chairman of the party, Julius Abure, told our correspondent to disregard the ‘fake news’, saying the state executives had no locus standi to remove Obi’s DG.

Okupe has been having a running battle with the top hierarchy of the LP and some disgruntled members of the National Working Committee of the party, many of who claim that he has a history of financial impropriety and intolerance.

The former DG has also been accused of polarising the party along with some alleged ‘dissident’ members he recruited from the Peoples Democratic Party.

Addressing newsmen on Thursday, Chairman of the Ogun State LP, Michael Ashade, announced that Okupe and the affected members’ offences were a breach of the party’s constitution.

A livid Ashade disclosed that Okupe ceased to be a member over his failure to meet the mandatory constitutional requirements to fulfill membership status and his failure to account for a missing N20m campaign fund.

He added that the offences of Okupe and the dismissed members were against Article 9(3) sub(iii) and Article 9(3)xi of the LP constitution.

The statement read, “Despite repeated demand from various meetings I had with Dr Doyin Okupe in respect of his mandatory constitutional requirements to fulfill membership status, he has failed woefully in this regards with some others to flagrantly disobey the constitution of the Labour party.

“He has also polarised the party in Ogun State with his crops of the PDP dissidents political liabilities who are only using the Labour Party to revive their not only irredeemable dead political and financial lives but has successfully stole all that is available in the LP.

“Therefore, in line with article 19(3) of the Labour Party constitutional provision, we declare that Dr. Doyin Okupe, having failed in the payment of his membership dues for the last six months of joining the party, has forfeited his membership of the party and no longer fit and competent to continue to act as the DG of the Presidential Campaign Council.

“We hereby notify our National Chairman, Julius Abure and Labour Party presidential candidate, Peter Obi, that it is expedient to obey the constitution of the Labour Party by immediately appointing another DG for the PCC and that should come from the North to reflect federal characters and political balance.

“We challenge Okupe to provide evidence of any payment in respect of membership dues prior to today into any bank account of the party.”

Reacting to the news, the LP national chairman asked Nigerians to disregard it as fake news.

Abure said, “It is fake news. Can a state chapter suspend a campaign DG? They don’t have the power. These are riff-raffs that have gone to the All Progressives Congress to collect money. The people purportedly doing this have no such power. Their decision cannot stand.”

But the National Publicity Secretary of the party, Abayomi Arabambi, was indifferent, challenging people who were not satisfied with Okupe’s sack to seek redress in court.

“Something that is all over the media including papers, television and radio broadcast? We are talking about what is in the Constitution of the Labour Party here. If anybody wants to contest it, we will meet in court to prove it,” he said.

As of the time of filing this report, efforts made to get the reaction of the sacked DG proved abortive. Okupe did not return the calls of our correspondent nor reply the text message sent to his phone.

Peter Obi: I Used 22-car Convoy As Governor Until I Found...