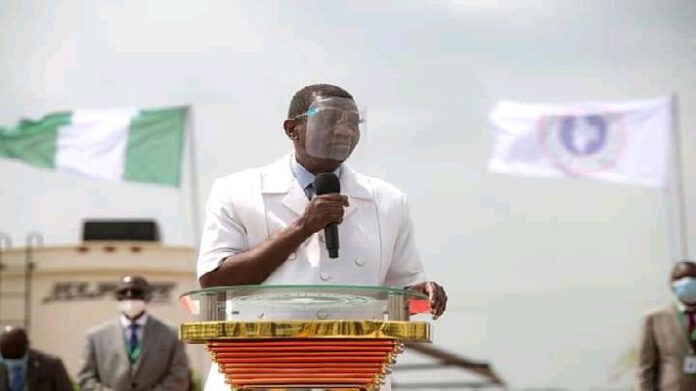 Pastor Adeboye has said Nigeria urgently
needs to restructure or break up. The 78-year
-old cleric stated this today, Saturday 3rd
October, 2020 at a 60th Independence Day
Celebration Symposium co-organised by the
Redeemed Christian Church of God and the
Nehemiah Leadership Institute.
At the symposium with the theme, ‘Where
will Nigeria be in 2060?’ Adeboye proposed
the adoption of a merger of the British style
of government and the American system of
government to pave the way for Nigeria’s
future, according to reports.

The former lecturer at the Department of
Mathematics of the University of Lagos said,
“Why can’t we have a system of government
that is 100 per cent Nigerian, unique to us?
For example, we started on with the British
system of government, somewhere along the
line, we moved over to the American system
of government
“Can’t we have a combination of both and
see whether it could help us solve our
problems because in Mathematics if you want to solve a problem, you try what we call
Real Analysis, then if it doesn’t work, then
you move on to Complex Analysis and see
whether that will help you. If that fails, you
move on to Vector Analysis and so on.
“I believe that we might want to look at the
problems of Nigeria in a slightly different
manner. Some people feel that all our
problems will be over if Nigeria should break
up. I think that is trying to solve the problems
of Nigeria as if it is a Simple Equation. The
problems of Nigeria will require quite a bit of
Simultaneous Equation and some of them
are not going to be Linear either forgive me
I am talking as a Mathematician.

“Why can’t we have a system of government
that will create what I will call the United
States of Nigeria? Let me explain. We all
know that we must restructure. It is either we
restructure or we break, you don’t have to be
prophet to know that one. That is certain
restructure or we break up.
“Now, we don’t want to break up. God forbid.
In restructuring, why don’t we have
Nigerian kind of democracy? At the federal
level, why don’t we have a President and
Prime Minister?