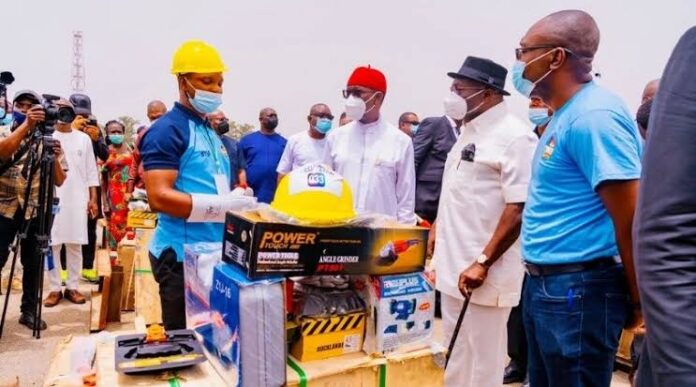 Delta State Governor, Senator Ifeanyi Okowa, has commended artisans in the state for their contributions to the development of Nigeria.

The governor, who was represented at the occasion by the former Ika North East Chairman of Peoples Democratic Party, PDP, Chief Godwin Ogadi, commended the organizers for their initiative, describing it as a unifying factor.

Speaking further, the governor urged the various unions of artisans to remain united, peaceful and law-abiding citizens, saying they should be expecting something good from his office.

“Again, I want to appreciate your continuous support for PDP, which has resulted in the victory of all our candidates during elections,” he stated.

Earlier in his remarks, the Chairman of the occasion, Elder Godwin Igborgbor, noted that the importance of artisans in any country could not be overemphasized, due to the roles they play in bringing development to the nation.

On his part, Delta State Chairman of Artisans, Chief Ifeanyi Abanum, thanked Governor Okowa for his good works in the state, pointed that it was unfortunate that artisans always come out in their large numbers to vote without benefitting anything from the government in terms of empowerment.

They noted that artisans association was an amalgamated union operating independently in the labour industry in Nigeria.

Speaking further, they said the association was formed in Ika Land in order for them to come together under one umbrella body to achieve a better goal of bringing more growth and development to Ika nation.