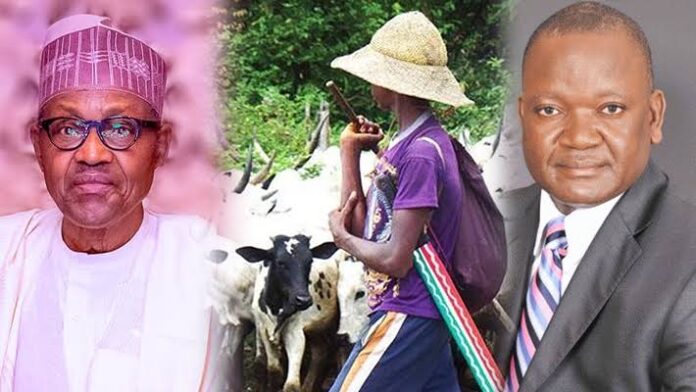 Governor Samuel Ortom of Benue State on Thursday urged President Muhammadu Buhari’s led Federal Government to focus on ending the increasing killings of innocent Nigerians across the country instead of using his foot soldiers to attack him for dishing out the truth.

Ortom told journalists in Makurdi that the statement released by the Presidency in response to his recent interview on Channels Television in which he raised a number of concerns bordering on the worsening security situation across the country was not only barefooted but lacked substance.

“I stand with what I said on Channels. I challenge them to a debate on channels Television about the issues. Nobody can intimidate me.”

The governor, in a statement later made available by his Spokesman, Terver Akase, said the statement by Shehu showed ‘the quality of the presidency Nigeria currently has.

“They abandoned the message and went for the messenger. To describe as ‘undistinguished’, the career of a man who has held many key positions at the state and national levels proves that those who penned the piece were under the influence of some negative substances.

“We advise the presidency to focus on ending the killing of innocent Nigerians, fix the economy as it promised and stop the stinking corruption under their watch.

“They can’t run away from their responsibility. They were brought to power to serve the country not to oppress the people and suppress their freedom of speech. They are on record to have publicly promised during their campaigns before the 2015 elections that they would respect the rights and freedoms of Nigerians if elected. Sadly, what the people of this country have got from the current government is the opposite of that promise,” he said.

See also  Questions Malami Refused To Answer On The "Re-Arrest", Return Of Kanu

Ortom said the past political offices he had held including that of a minister and his current status as governor underscored his distinguished political career.

Meanwhile, a former Special Assistant to the President on Assembly Matters. Abdulrahman Kawu, has asked Ortom to stop blaming the president for his failure as a governor.

The former member representing Sumaila-Takai federal constituency, in a statement said the governor was attacking the president to cover up his failures as governor.

He challenged Ortom to mention what he had done to address insecurity in his and 10 good projects completed or ongoing in Benue state that can be credited to his name.

Kawu said, “We are all worried about the insecurity situation we found ourselves, but we must also appreciate and support the efforts being made by Nigerian authorities to restore normalcy to the crisis prone areas.

“I was shocked when I read what Ortom said about the president. I believe it is high time to disregard politicians like Ortom, who are hiding under political identity to cover up their failures. We must summon courage to expose such politicians for people to know their true colours.”

Tallen Withdraws From Senatorial Race, Hopes To Continue As Minister