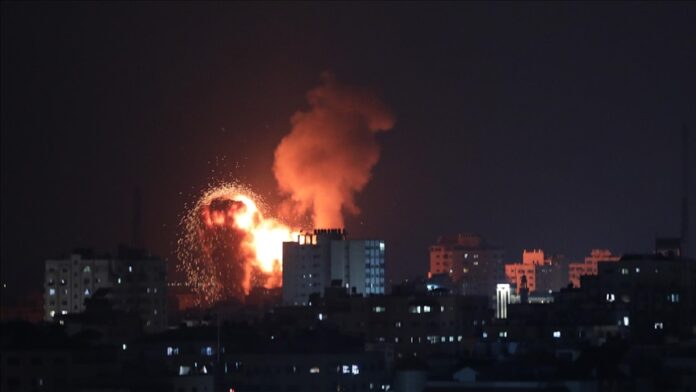 Palestine on Monday evening called on the international community to intervene urgently to stop the Israeli aggression on the Gaza Strip.

Speaking to Anadolu Agency, Ibrahim Melhem, the spokesman for the Palestinian government, said they closely follow “the unacceptable Israeli escalation in the Gaza Strip” and demanded “the immediate and urgent international intervention to stop the Israeli massacres against Palestinian civilians.”

Melhem slammed Israeli’s brutal and barbaric aggression describing it as the Jewish state’s “lust for murder.”

“The international community and human rights institutions are required to condemn the Israeli aggression and racism in the Palestinian Territories,” Melhem said, adding that the Palestinians are only defending themselves from being evicted from their homes.

According to the Palestinian Health Ministry, at least 24 Palestinians, including nine children, were martyred in the Gaza Strip on Monday evening and more than 103 were injured.

The Israeli army said it targeted Hamas targets in the Gaza Strip as well as eight activists in the movement.

Palestinian resistance groups launched around 60 rockets, including seven on Jerusalem, while the rest of the rockets targeted Ashkilon, Sderot and settlements near Gaza Strip.

The move came in response to continued Israeli aggression at the Al-Aqsa Mosque and the eviction of Palestinian families from the Sheikh Jarrah neighborhood in occupied East Jerusalem.

Also, an Israeli was injured as his car was targeted by an anti-tank missile near Gaza Strip, according to the Israeli army.

Earlier Monday, the Joint Chamber of Palestinian Resistance Factions in the Gaza Strip gave Israel until evening to withdraw its soldiers from the Al-Aqsa Mosque and the Sheikh Jarrah neighborhood in occupied Jerusalem and to release the detainees.

According to the Palestine Red Crescent, at least 334 people were injured on Monday as Israeli forces fired rubber-coated bullets, tear gas, and stun grenades at Palestinians who were on guard to prevent possible raids by extremist Jews.

Tensions have run high in the Sheikh Jarrah area since last week as Israeli settlers swarmed in after an Israeli court ordered the eviction of Palestinian families.

Palestinians protesting in solidarity with the residents of Sheikh Jarrah have been targeted by Israeli forces. Hundreds of protesters have been injured in the process.

Israel occupied East Jerusalem during the 1967 Arab-Israeli war and annexed the entire city in 1980 – a move that has never been recognized by the international community.

What To Do If Your Tyre Bursts While On Top Speed

APC Must Do More Before 2023 Elections – Tinubu

2023: Why The North Will Support Peter Obi