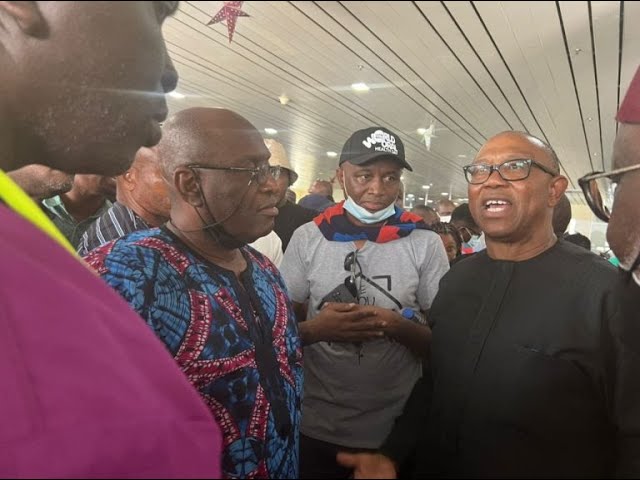 The Former Anambra State governor and 2023 presidential aspirant on the platform of the Peoples Democratic Party, Peter Obi, came to the rescue of passengers who had been kept waiting for over 24 hours at the Nnamdi Azikiwe International Airport, Abuja, News Desk Paper reports.

On Monday morning, Peter Obi refused to board his flight at Abuja airport in order to assist stranded Nigerians.

Obi who has been traveling across the six geopolitical zones to consult stakeholders and party members over his presidential ambition, was reportedly moved by the plight of the travelers.

News Desk Paper gathered that Air peace, due to unknown reason delayed Abuja-Benin flight for 24hrs, since, Sunday. On Monday morning, they reneged on the 7am rescheduled flight, for no reason. This led to argument as the situation got rowdy.

While the argument was going on, Peter Obi arrived at the airport enroute to Jalingo.

News Desk Paper also gathered that Air Peace officials offered him a VIP treatment by attempting to pass him through a different boarding but Peter Obi declined, and went further to question why ordinary Nigerians like him were stranded at the Airport.

But Obi decided to stand amongst other travelers. He immediately made some calls and all the stranded passengers were boarded.

The over happy crowd erupted in chants of Obi! Obi! Obi! at the airport. Many snapped photos with him.