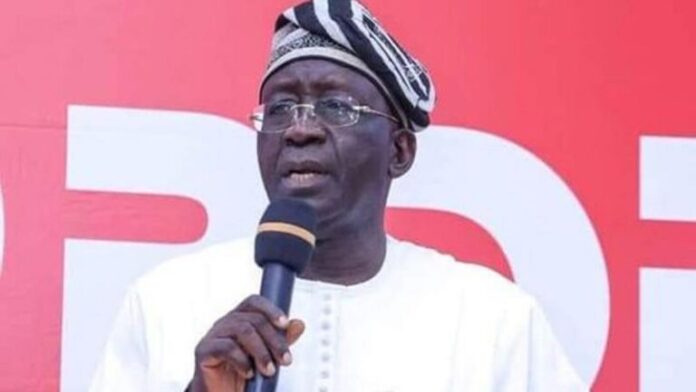 Spokesperson of the Atiku Abubakar Presidential Campaign Organisation, Mr Charles Aniagwu, has given reasons why the Peoples Democratic Party (PDP) was exploring other options in resolving the crisis rocking the party.

Aniagwu said as a listening party, they were taking a second look at the issues based on what was permissible by the laws of the party.

Speaking on Arise TV on Saturday, Aniagwu said that sacking National Chairman of the party, Senator Iyorchia Ayu would create constitutional crisis for the party which would snowball into greater problems than what the party was currently faced with.

According to him, the main issue being canvassed by the stakeholders is the stepping down of the National Chairman which has now been overtaken by events following the vote of confidence by the National Executive Committee (NEC) of the party.

“People may misinterpret it to mean calling the bluff of certain stakeholders but that is far from it because the party leadership examined the issues vis-à-vis the provisions of the party’s constitution as amended in 2017.

He said because the positions were elective positions, even if Ayu were to step down for power to come to the South, the provisions of the constitution of the party would also be offended.

“That can only happen if you can also take a decision to remove the Deputy National Chairman of the party who the lot immediately falls on by provisions of the law.

“Even if the party is able to solve that puzzle by bringing both National Chairman and Deputy to South, the third person in the hierarchy of the National Working Committee of the party is the National Secretary and that is in the South specifically Senator Samuel Anyanwu from Imo State.

“Now if you decide to bring this two positions to the South, have you also made arrangements to take the National Secretary to the North?

“Because of these legal impediments the party examined it that given the time that we have which is just about six months to the general elections, that it may likely snowball into some form of crisis that could trigger a whole lot of discomfort within the party if we proceed to begin to make these changes that there is the tendencies that the party may be embroiled in a crisis that would be worse than the one we are seeing at the moment.

“That greater crisis is what the ruling APC is waiting to happen but the leadership of the party is intelligent enough and am happy that Governor Nyesom Wike and other leaders appreciate the need for the party to move as a whole into the 2023 general elections.”

The campaign spokesman further said it was on the basis of this that the party decided to look at what was possible at the moment and that gave room for the resignation of Senator Walid Jibrin and subsequent emergence of Senator Adolphus Wagbara as Chairman Board of Trustees.

“The emergence of Wagbara in the south to join the Vice presidential candidate and National Secretary had created some form of balance in the interim.

“But what is most important is that there is a bigger elephant here which is winning the 2023 general elections because Nigerians are looking up to the PDP to rescue the nation from where we are at the moment.

“I am convinced that our leaders who have been craving for these changes would appreciate the fact that the party is listening but because of time probably when the party may have won the elections in 2023 by the grace of God, we can now proceed to make some of these alterations that may not be injurious to our quest to win the general elections,” Aniagwu said.
On the performance of Governor Ifeanyi Okowa in Delta and the value he brings to the ticket as Vice-Presidential candidate, Aniagwu, who is Information Commissioner in Delta, said that Okowa had performed tremendously with his 5-point agenda, adding that job creation through skill acquisition has been profound.

He noted Okowa had improved the standard of living of the people by reducing poverty in state which attracted National Bureau of Statistics (NBS) ranking as the second least poor state in the country in 2018.

On infrastructural development, he said Okowa has constructed well over 1,833km of roads with over 900km of drains across the three Senatorial Districts.

“But what is most important to us is what we have done in the creeks of Delta, area that where hitherto referred to as very difficult terrains to develop, we have made a whole lot of impact in that region which is why we are enjoying a whole lot of peace in the Niger Delta.

“For a very long time now we have been able to ensure that our brothers and sisters in the creeks are carried along and this is one the things that our principal the Presidential candidate saw and said I need a partner who is progressive in nature.

“When we live in unity as a country, you will discover that we will return to winning ways, all these other symptomatic malaise in our country will be solved, because issue of corruption, bad economy, insecurity, they happen because our diversity was badly mismanaged by the APC,” Aniagwu stated.

2023: Why The North Will Support Peter Obi