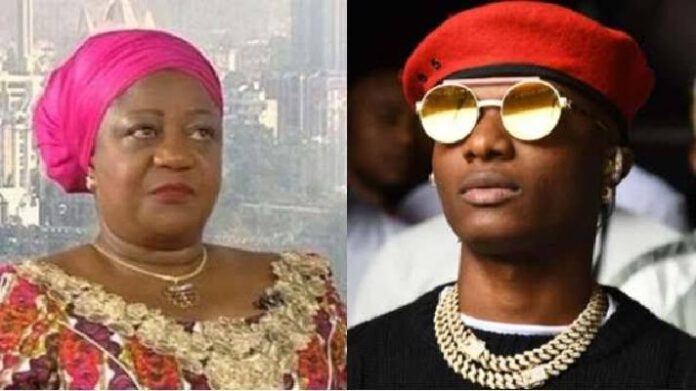 Pop singer Wizkid has fired back at the special assistant to President Muhammadu Buhari on social media Lauretta Onochie after she criticised him for ‘insulting’ the president on Sunday.

It all started after the ‘Ojuelegba’ singer knocked Buhari for wishing US President Donald Trump a “quick recovery from COVID-19” amid the security tension in Nigeria.

Wizkid had taken to his Twitter page to vent his annoyance at the president, describing him as an “old man” who should be paying attention to issues in the country rather than in the United States.

He spoke amid outrage against the Special Anti-robbery Squad (SARS) after a video showing a man allegedly gunned down in Delta by operatives of the police unit went viral.

Reacting on Tuesday, Onochie described Wizkid as a “dumbkid”, who exhibited crass ignorance and childishness in the way he addressed the president.

Wizkid then responded, saying Onochie should be ashamed for making such utterance about age.

He wrote: “Lol a 77 year old man is not young ma.. You are a woman and a mother and kids are getting killed by police/sars and this is all you have to say? shame on you!!! shame on you!! I am a father and age has nothing to do with demanding for a better governance in my country!!”

Due to the public outcry the Inspector-General of Police (IGP) Mohammed Adamu had banned SARS from undertaking routine patrols and search duties.

Celebrities also called for protest using the ‘EndSARS’ hashtag, with Runtown volunteering to lead a march against police brutality at the Lekki toll gate on Thursday.

I Am Honoured To Be Elected PDP Presidential Candidate – Atiku