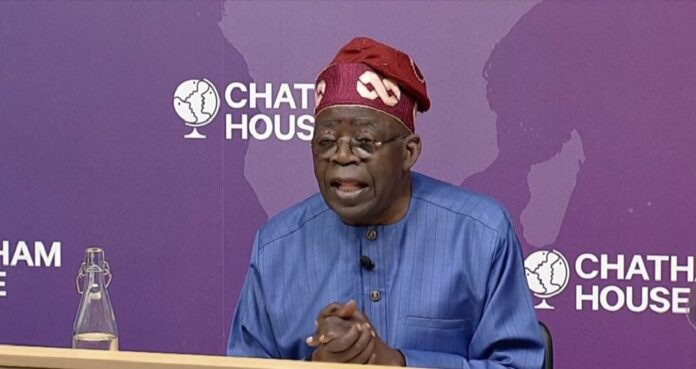 The presidential candidate of the All Progressives Congress, APC, Bola Tinubu, has apparently dodged most of the questions from the audience after his appearance at Chatham House, stirring negative reactions among many Nigerians.

Mr Tinubu, who was at the United Kingdom’s elite foreign and policy think-tank institution, spoke about his plans for security, economy, and foreign policy for Nigeria if elected president next year.

Asked about how he intended to tackle challenges plaguing the country, the APC standard bearer seemingly dodged questions, directing some members of his entourage to respond to the questions.

Mr Tinubu said the decision to assign these questions to the team members was a sign of teamwork.

In a video circulating on Twitter, Mr Tinubu was heard saying: “I have an unbreakable team. To demonstrate that, I would choose the first question assigned to Dele Alake, and the second assigned to Nasir El-Rufai, and the third question to Ben Ayade.”

Reacting to the development, some Nigerians on social media expressed their disappointment with the former Lagos State governor’s seeming inability to answer the questions posed before him.

Below are some of the reactions:

@VictorIsreal, tweeted “Omo! They asked Tinubu questions and he directed El-Rufai and Ayade to answer the questions. He said he believes in teamwork. Imagine asking Peter Obi a question on national TV and he directs Kenneth Okonkwo to answer it. That’s how ridiculous It sounded. Nigerians open your eyes.”.

Another user @FemiOyedun1, said the APC candidate would never win the election, “For every question directed to the APC presidential candidate at the Chatham House. Dele Alake, El Rufai, and Ben Ayade are the ones answering, he even eyes Sanwoolu to answer a certain question. He said it was teamwork. By God’s grace, Bola Tinubu won’t be Nigeria’s president.”

See also  What Goes Around Comes Around By Ralph Omale

@Ifedapo Daniel, noted that the ex-Lagos governor is a major disaster, Nigerians must avoid in 2023,”

“Bola Tinubu is the biggest disaster Nigerians must avoid in 2023! He was being asked questions at the Chatham House, his proxies were the ones answering! How did we get here? At this point, if you’re planning to vote for APC, thunder must strike you down oo!”, he tweeted.

Another user, Princeujay, said “Dele Alake, El-Rufai, and Ben Ayade had to borrow Tinubu their brains to answer questions at the Chatham House in London. National humiliation and shame to APC to have a brain-dead man as a Presidential candidate”.

He said: “Chatham House show of shame. You want to be the president but avoiding answering questions, instead, you are re-directing the answers to El-Rufai, Alake, and co.

“Nigerians want to be governed by a person, not a robot who cannot exercise independent thought in answering questions”

Buhari Five Years As President Is A Waste – Uche Secondus