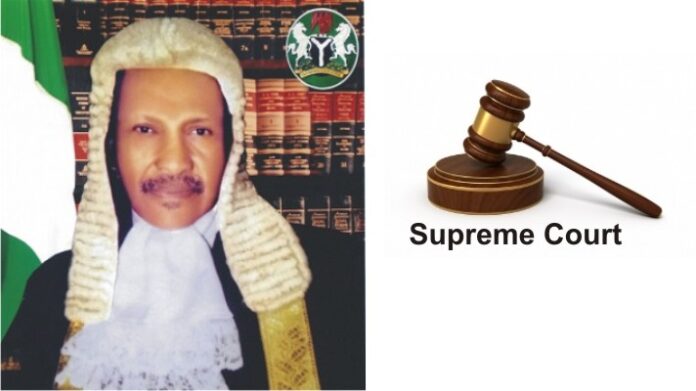 A retired Justice of the Supreme Court, Olabode Rhodes-Vivour, on Monday, maintained that many previous decisions of the apex court should be laid to rest and never followed.

Justice Rhodes-Vivour, who clocked the 70 years mandatory retirement age on Monday, spoke at a valedictory session the Supreme Court held in his honour.

He took his last opportunity on the bench to address key issues affecting both the judiciary and the nation.

The retired jurist noted that the Supreme Court had on several occasions, held that it is absolutely bound by the doctrine of Precedent or stare decisis.

He said the doctrine, in effect, means “stand by your decisions and the decisions of your predecessors, however wrong they are and whatever injustices they inflict”.

Justice Rhodes-Vivour argued that abiding by such principle would ensure that the apex court continued to follow some of its previous judgements that no longer make sense.

According to him, “There are some Precedents that are clearly out of date, and should no longer be followed.

“I am of the view that Precedents that no longer make sense anymore or are outdated should be laid to rest and never followed”.

On the issue of corruption, Justice Rhodes-Vivour stressed that it exists in all the countries of the earth, adding that Nigeria is no exception.

He said what should be done was to reduce it drastically, “thereby making our dear country an exception by building credible and transparent systems”.

The retired jurist further observed that elections in the country are always protracted due to the fact that the stakes are usually high.

He noted that most elections are often resolved by the courts, simply because most politicians are never satisfied with the results announced by the regulatory body charged with the conduct of elections (INEC)”.

Justice Rhodes-Vivour recalled that he had in a judgement he delivered in 2016, in an election dispute that involved the Governor of Cross River State, Emmanuel Udom, pointed out that a careful reading and understanding of decided authorities, would show that a Petitioner has an uphill task proving his petition in accordance with the Electoral Act.

He, therefore, recommended that the Electoral Act should be amended to shift the burden of proof to INEC to prove that it conducted a fair and reasonable election.

More so, the retired jurist noted that though he had in 2006, while serving as a Justice of the Court of Appeal, held in the case of Dokubo-Asari Vs FRN that where National Security is threatened or there is the real likelihood of it being threatened, human rights or the individual rights, must be suspended until the National Security can be protected or well taken care of.

He however made a U-turn on Monday, stressing that national security must be visibly threatened before anyone is denied his rights.

He said: “No one should be denied his rights on the whims and fancy of anyone in authority”.

On the issue of inheritance, Justice Rhodes-Vivour said his judgement that abolished customary practices excluding female children from inheriting their father’s estate, was informed by his vigorous study of the Bible.

The retired jurist said he had in his verdict in Ukeje V Ukeje (2014) 11NWLR (Pt. 1418) P. 384, held that “a customary law which disentitles a female child from partaking in her deceased father’s estate, is in breach of section 42(1) and (2) of the Constitution, a fundamental rights provision guaranteed to every Nigerian.

“The said Customary law is void as it conflicts with session 42(1) and (2) of the Constitution.

“Female children are entitled to an inheritance”, he added.

On the issue of convicts, Justice Rhodes-Vivour said he was of the view that they should be allowed to serve their prison terms only after their appeals are exhausted.

“The reason being that some convicts serve several years in prison before their appeals are heard and decided.

“Their appeal may be found to be meritorious. They are then released. No compensation paid for the time spent in prison”.

Meanwhile, the Chief Justice of Nigeria, CJN, Justice Tanko Muhammad, in his address at the event, described Justice Rhodes-Vivour as “a rare gem”.

He said the retired jurist diligently and meticulously offered unquantifiable services to Nigeria and humanity.

“We are all here today to felicitate with an accomplished jurisprudential iconoclast that has offered the best of his intellect to the advancement of the legal profession through his several years of inimitable adjudications.

“His Lordship is a rare gem and unblemished symbol of humility and piety.

“His proficiency in the dispensation of justice, which is anchored on his mastery of law, presents him as a man of honour and scholarship.

“His judgments are not only incisive but also analytical and opulent by all standards.

“His robust contributions to the development of our jurisprudence are inviolable and fascinating.

“His impeccable attention to details in every matter before him is alluring and salutary as well”, the CJN added.

Pastor Chris: “You Shouldn’t Be Afraid Of Touching COVID-19 Patients”