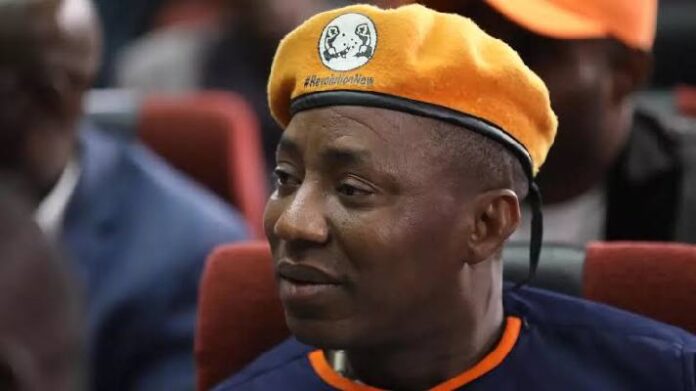 The name OMOYELE SOWORE has always been on the news for a year Now.

Hardly can a week or months go by without hearing SOWORE’s voice or seeing his vituperation against an individual politician or the federal government of Nigeria either on his Twitter handle or his online media platform called “saharareporter”.

It is of public knowledge that this fellow was also in the race for presidency during the last general election of 2019 under Action Alliance party platform in which they all lost to Buhari’s incubency in a keenly contested election by various political parties.

Many of the parties have either gone dormant or mute as though they don’t exist anymore after the emergency of president Muhammad Buhari as the winner.

Even “people’s democratic party” (PDP) who was the first runner up in that election have gone mute or down to better restrategise for the next general election come 2023 after seeking legal actions to regain the mandate which they alleged to have been stolen by president Muhammad Buhari’s All Progressive Congress, APC.

But OMOYELE SOWORE, instead of toeing the same path as all other political parties have vowed never to allow the federal government to have a breathing space.

On August 3rd 2019, few months after the general election in which he (OMOYELE SOWORE) was one of the contestants, SOWORE launched a nation-wide protest movement which he tagged “#revolutionnow” to remove a democratically elected government.

The federal government and it’s security agents felt bad with the word #revolution” and devolved his agents to clamp down on him over what they termed “a coup like manner” which was scheduled to take place and got him arrested almost immediately. He was charged to court on some counts bordering on treasonable felony.

Since then, many political pundits have been trying to come to grasp with what #revolutionnow# seems to stand for. It then begged this questions.

Where it starts from and where it will eventually end.

What would be the gain and the losses if it is eventually attained.

Many may feel it is good idea judging from the facts that Nigeria governance systems is not at par with our expectations, no doubt about that but SOWORE’s “revolutionnow” strategy is not an alternative to the better Nigeria that we all want.

Two, revolution by it’s dictionary meaning is the removal and replacement of a government especially by sudden violent action.

It is a political upheaval in a government or nation – state characterized by a great change.

Most world revolution protest have never gone without a blood bath resulting in the death of many citizens. If that is what SOWORE want, I think he needs to relocate his family from new York in United States of America where they are all citizens, to Nigeria and let’s do the fight together.

We all are interested in a changed for better Nigeria but not in a radical manner.

A change for better Nigeria can be actualize through a gradual process of constant engagement, dialogue, consultation and a change of institutional purgatory and healing from all corrupt tendencies that bedeviled them.

If revolution must take place, it must start with a particular section of our national life just like we saw during #endsars which was just one malady among many that we face as a country.

We could see the response of all international organizations towards #endsars protest even though it wasn’t substantially attended to.

Why? Because it has a clear cut agenda for a change unlike the change of all political hegemony to be replaced other political glutony.

If SOWORE can come to the youth and present a clear cut angenda behind his agitation, I’m sure too many people will buy into the ideas of the kind change he want.

As it is now, many people are yet to understand the #revolution now movement and as such cannot afford to bet their life for it.

We want change but not a change through blood letting and violent.

Tell those who knows SOWORE to go back and redraft his agenda for the “revolutionnow” so that everyone can be brought on board with him. Not selfish and a one man change.

Stray Bullet by Ralph Of a public affairs analyst.

How To Properly Use Spices