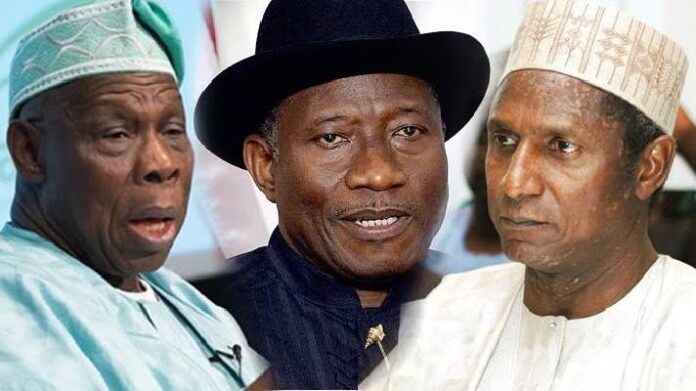 This piece may offend many especially the proponents of godfatherism in Nigerian politics but I indulge my esteem readers not to pay attention to emotions and sentiment because my bullet may stray a little bit in the direction of some big politicians (de crem de la crem of politics) on Nigerian political landscape.

Godfatherism has become like a cancer that has eating very deep into the fibre of our political being. Just like godfathers are doing everything possible to be every where in all sectors of our national life, the so called godsons are always ready to get acquaintance with their so called godfathers in order to advance their political ambition using the influence of a godfather.

They are ready to do the bidding of their godfathers rather than the mandate that took them there. They pledged allegiance to them and always even ready to kill for their sake because they know the power that godfathers weld around them. We have witnessed such killing recently in Lagos State at lekki tollgate.

They know that they might not get reelection next time if they act against the godfathers wishes. They are the ones in power but they aren’t actually in power because the godfathers rules from behind the scenes. The instructions is you have a script to act out. If you don’t act according to my dictates, you would be removed from power just like Ambode, the former governor of Lagos State. Am not a lagosian. I have only been to Lagos once in my life but the reports we hear from Lagos during Ambode shows that Ambode did well as governor of Lagos State and he deserves reelection if things were done the way it should be done.

As long as you play by their whims and Caprice as godson, your incompetence doesn’t matter, your shortcomings may not matter as well as long as you can masserch their ego and interest. You are to be there as figure head and errand boy while your master defend every step you take as a his boy. It did worked in kogi state ( my own state of origin) when Governor Yahaya Bello was seeking reelection as governor of Kogi state in the face of poverty, starvation, insecurities, many years of non payment of salary and suicide that looms in the state. He vehemently knew that he cannot win free and fair reelection in kogi state so he needed one man endorsement to get back to power and that man gave the endorsement that saw to his reelection.

Even before the primary election, we have heard from the then national chairman of his party saying that Yahaya Bello didn’t deserve second term. That chairman would have won the heart of many kogi state indigenes and Nigerians who paid close attention to governance issues in kogi state if he had stick to that decision but the chairman had his own godfather who controlled him invisibly, he was asked to rescind that decision after the governor had had overnight honey moon with the Ogakpakpata of them all in Lagos.

It became easy for him too because the Ogakpakpata of them all have his eyes on presidency slot come 2023 and he needs to spread his tentacles all over the thirty six states of the federation so he can have an easy ride to the presidency. Do you know that having 23 governors of our 36 states of the federation on your own side of the political barricade can give you an easy ride to the presidency because those governors will love to act out your script to perfection? That was the plan! Same thing almost happened in Edo state but Edo masses were wiser and smarter than the godfathers.

I applaud Edo people till this minute. I wished I could be edolite. Godfatherism succeeded in Lagos State, Ondo state and kogi state respectively but Edo state show us the way out of godfatherism. Thanks to my Edo people for that. Coming to the one that is a burning issue right now, talking about the senator representing Adamawa north ( Elisha Ishaku Abbo) who is my man today. Note must however be taking that he has never been my man since the sex toy shop saga that took place in Wuse Abuja even before he was sworn in as the senator of federal republic of Nigeria but because he has been able to cut the chain of godfatherism around him and break lose the hold -not only braking lose the chain, he did it on the day that his godfather was expecting a big publication on many national news papers as happy birthday gifts and wishes for him from a political godson, he rather sent red alert to his supposed godfather by given him decamped notice on the floor of the Senate which some people felt was embarrassing. Embarrassing? How? Don’t you know that politics is a game of interest?.

When people’s interests did not aligned any longer, what do you expect? There could have been other days but he chose that day to serve as an eye opener to all so call influential politicians in Nigeria that no man is God over man. Edo state and senator Ishaku Elisha Abbo have shown us the way. Let our conscience never be a prey to these political tigers masquerading themselves democrats. This is stray Bullet. It could hit anybody.

Is Creating A Website Still Advisable In This Era?