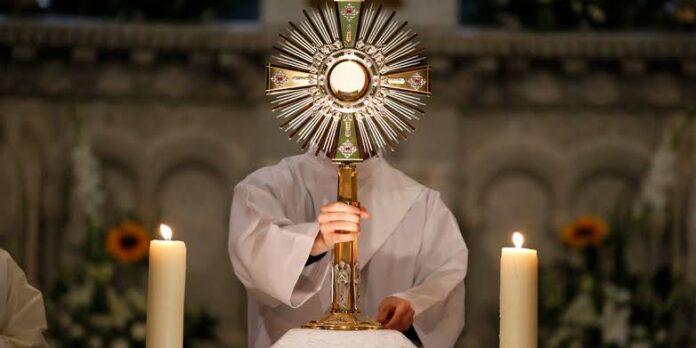 The solemnity of our lord Jesus Christ the king Sunday, It celebrate the widely inclusive power of Christ as Ruler and Master of the universe.

Authoritatively called the feast of Our Master Jesus Christ the Lord also known as (Feast of Corpus Christi) was founded by Pope Puis XI in 1925 during a time when respect for Christ and the Church was waning, when the feast was needed most.

Pius hoped the institution of the feast would have various effects. They were:
1. That nations would see that the Church has the right to freedom, and immunity from the state ( Quas Primas , 32).

2. That leaders and nations would see that they are bound to give respect to Christ ( Quas Primas , 31).

3. That the faithful would gain strength and courage from the celebration of the feast, as we are reminded that Christ must reign in our hearts, minds, wills, and bodies ( Quas Primas , 33).

Today, the same distrust of authority exists, although the problem has gotten worse. Individualism has been embraced to such an extreme, that for many, the only authority is the individual self.

Feast of Corpus Christi is celebrated on the last Sunday of ordinary Time according to Catholic believe, the Sunday before Advent
In 2016, the feast falls on November 20th which is the closure of the jublie year of mercy.

As a catholic I give my self one week preparing for the feast and proccesion.. what about?

Ondo Election: There Is Gang Up Against Us – APC

Lekki Tollgate Protest Ruined By Army, Not Hijacked By Hoodlums –...