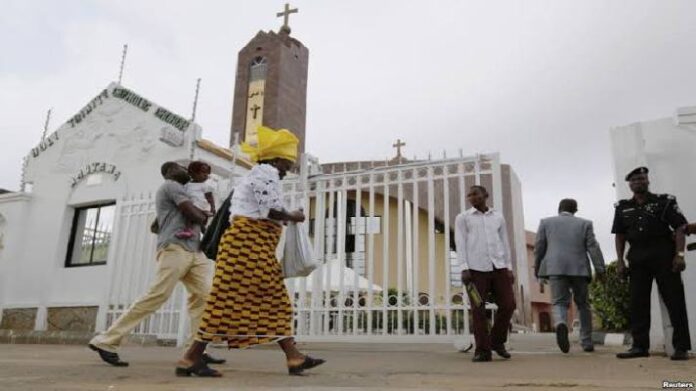 Religion is a particular systems of beliefs and the activities that are connected with the system.

Before going further into this piece, I must plea with anyone who may come across this piece and also apologize in advance to those who may feel offended by this by this positions and my perspectives about religion, because religion in Africa is a very knotty issues and a hard nut to crack.

Someone people who may not even have the mind of their own can take you to gotta for talking about religion believing that they are fighting God’s course.

I never envisaged writing about religion because of the sacred nature of it and how we regard religion in this part of the world.

Usually, when you are pressed with some certain truth about a particular thing that affects people’s way of life, coming out to share your own perspectives about it may not really be a sin as some of us would want to look at it because the holy book have said that ” you shall know and the truth shall set you free.

I could remember during college days when our sociology lecturer came up with Karl Max’s view about religion during the formative years of religion in Rome and I quote” religion is the opium of the masses, the soul of soulless world, the heart of the heartless world, it does nothing rather than to ameliorate the pain of the masses” end of quote.

That brought us to where we are now because even those who brought religion to Africa came with different motives. They came to Africa using religion and kotma, to intimidate and cajole our forefathers into accepting their religion so they can freely explore our mineral resources in Africa.

And it was such that anyone who could summon courage to oppose them would be dealt with mercilessly by their Kotma (policemen) according to Chinua Achebu in things fall apart just like they did to Jaja of Opobo when he was tricked with the whites to go for a meeting with queen of England but killed and thrown in to the river along the water ways.

You dare not oppose or reject their coming to your land or you have made up your mind to die as their policemen are always ready to take you to prison or execute you instantly.

And because, our forefathers, out of inferiority complex upon seeing a white man for the first time became so inferior in their own eyes and let everything to them.

At this point, one of our musicians who came from Benin in Edo state, don’t longer remember his name sang about it when he said “God is neither white nor black”. We are all created by same God and there isn’t a superiority between man and man.

It is good to say here too, what Chinua Achebe said at the beginning of his book in “

” Turning and turning in the widening gear,

The falcons cannot hear the falconer,

They have put a knife on the things that held us together and we have fallen apart,

The white came to poisoned our minds against each other. They came to distabilised our cultures, tradition and ways of life and we are caught in the web of confusion and distractions as to which God to serve.

Somewhere in Africa, you can’t drink a bear or an acohilic contained wine but you can take anything else that can make you high enough including all kinds of drugs and India hemp and nothing happen to you.

Today in Africa, some people believes that you can kill human being and get a reward of 7 virgins when you get to heaven.

So, heaven is as cheap as that?

Today, even Muslims do not believe in the same God among themselves and so have different doctrines in the one religion.

Today, Christianity have different gods according to their doctrines and beliefs.

Those in Pentecostal feels that they worship the true God while those in the authodox or Protestant Catholics worships the fake God. Some says that Saturday should be the day to go to church to worship God

They have succeeded in balcarnising the body of Christ to suit their selfish reasons.

Heresy had become the order of the day in Christianity.

A Catholic Protestants cannot marry a Pentecostal church goer because of their different beliefs and doctrines that one will go to heaven and the other will not go to heaven.

If making heaven is really our goals rather than instant miracles we seek every day, do you think that all this will happen? If we have it at the back of our mind that when we get to heaven, God will not ask us what church you attends on earth but our love and our good deeds towards one another.

If we all know that been religion is different from been godly, why don’t we promote godliness above religion?

Why don’t we focus on God rather than pastors and prophets?

If heaven is our goal, why don’t we use our religious platforms to express our been godliness and glorify God because every one of us knows that we have only one supreme God who is the of heaven and earth?

How To Travel From Lagos To Benin Republic