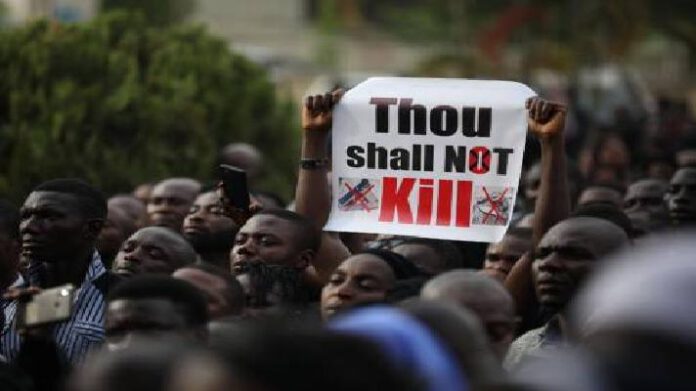 The United Kingdom All-Party Parliamentary Group for International Freedom of Religion or Belief, a group of over 100 British parliamentarians from different political parties and from both Houses of Parliament, has condemned the genocide of Christians in Nigeria.

The group also raised concerns on the escalating inter-communal violence in Nigeria characterised by the farmer-herder conflict, a clash that has claimed the lives of thousands of people and displaced hundreds of thousands more.

The APPG noted that the unchecked killings and displacements have caused untold human and economic devastation and heightened existing ethno-religious tensions. It stated that the response of the Nigerian Government to conflict involving farmers and herders had been inadequate or ineffective and that this had allowed violence to emerge and escalate.

Lamenting the killings of Christians by Boko Haram and herdsmen, Jim Shannon, MP Chair, All Party-Parliamentary Group for International Freedom of Religion or Belief, described the act as archaic, saying “This widespread and tremendous difficulty is a somewhat novel experience for many of us in the UK”.

He added, “Shockingly for a Commonwealth country, Nigeria ranks 12th on Open Doors World Watch List 2020 of countries in which Christians are most persecuted. By comparison, Syria ranks 11th and Saudi Arabia ranks 13th, with Iraq 15th and Egypt 16th.

“As Nigerian Government ministers have publicly and rightly admitted, Christians are being ruthlessly targeted, specifically because of their faith.

“Undoubtedly though, peaceable Muslims, through collateral violence can also become victims of this cruel Islamist religious ideology.
“It is a destructive and divisive ideology which readily mutates into crimes against humanity and can pave the way for genocide. We must not hesitate in saying so.”

The APPG blamed Nigerian politicians for further fueling the attacks on Christian saying political actors are supporting the killings to further their own interests.

APPG posited that for peace to reign in Nigeria, there must be justice adding that to reduce conflict, it is vital to both improve security responses and ensure that perpetrators of violence are held accountable.

The group also called for the establishment of state police to support national police and that traditional and community leaders, who encourage members of their communities to perpetrate violence are thoroughly, independently and impartially investigated.

I Will Tell You How I Handled IPOB If You Consult...

EFCC Files 17-Count Charge Against Okorocha After His Declaration