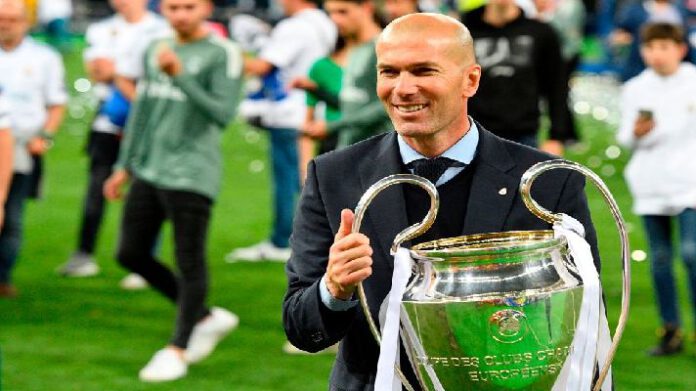 Real Madrid boss, Zinedine Zidane, has been voted the best manager in the world by French newspaper L’Equipe, beating Jurgen Klopp and Pep Guardiola to the title.

He was re-appointed within just ten months, however, and has gone on to win another La Liga title and another Super Cup this season to continue his remarkable record with Madrid.

Within just 10 months, Zidane was re-appointed, however, and has gone on to win another La Liga title and another Super Cup this season to continue his remarkable record with the Los Merenguez.

Klopp and Guardiola join Zidane in the top three for their remarkable achievements, but there was no room for Tottenham boss Jose Mourinho, who L’Equipe described as having a “fading image and magic.”

On Zidane, they wrote: “He is a coach who has experienced only one club, and quite rarely defeat.

“A coach who did what none of his predecessors did, win three Champions Leagues in a row (2016, 2017, 2018), who was able to return to the footsteps of his own glory and question everything to become a new Spanish champions with Real Madrid last month.

“Guardiola has something else, his dogma, his permanent research, the virtuosity of his collective game, dizzying constructions, his consistency (198 points in two seasons from 2017 to 2019), but he does not have everything, and chooses his central defenders as his attackers or midfielders.’

They also added Klopp has “charisma” and described him as the “fashionable man” and “favourite of many.”

Zidane has a chance of winning a fourth Champions League as coach later this month but faces an uphill task as he goes head-to-head with two-time winner Guardiola when Manchester City and Madrid meet in the second leg of their last-16 clash on Friday, with City 2-1 up from the first game in Spain.

IPOB Sit-At-Home: No Disruption Of NECO Examinations In South-East – NECO

The Economic Future Of Our Nation Is Extremely Bright – Osinbajo